Putting Back the Style

HAZELLE JACKSON looks at the replacement of railings, gates and other decorative ironwork cut down in the 1940s. 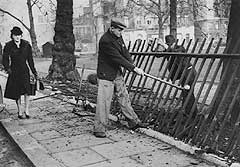 "All wrought iron had been removed from public places for use in the war effort. Streets were denuded of gates, railings and anything else not serving an essential purpose. Our trudge up the steep hill of Erlanger Road to my grandparents' house evokes the memory, not only of aching legs but of the stubs of metal at the edge of the front gardens that had formerly been graced by wrought iron railings. " 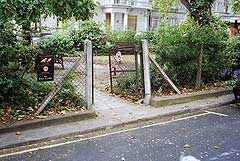 "Many London squares were stripped of their historic railings in 1941 and are still enclosed by ugly chain link fencing. The Crown Estate's superb reinstatement of the railings to Park Square East and West, plus the new gates to Regent's Park (following the original designs) has transformed one of London's greatest architectural set- pieces. 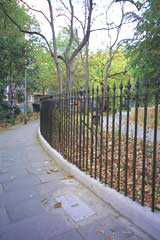 "Most recently [we have seen] the completion of works to restore Brunswick and Bloomsbury Squares. Both are included within the English Heritage Register of Parks and Gardens of Special Historic Interest and both have been awarded grants. The works included new planting, path repairs, new furniture and, at Brunswick Square, the reinstatement of the impressive perimeter railings and gates.

"The works complement the landscape works recently completed at the adjoining Coram's Fields to restore elements of the historic landscape and provide new play facilities."

In 1940, during WW2, Prime Minister Winston Churchill appointed press baron Lord Beaverbrook to be his Minister of Supply and Beaverbrook set about the task with his customary zeal. Underground munitions factories were set up in old mines and in July Beaverbrook launched a press campaign for the public to donate aluminium pots and pans to make fighter aircraft: "We will turn your pots and pans into Spitfires and Hurricanes, Blenheims and Wellingtons." The public responded by donating over 70,000 tons of aluminium, a good percentage of which was recycled in aircraft production.

Beaverbrook also identified a need for heavier raw materials like iron and steel for munitions. In 1941 the government passed an order compulsorily requisitioning all post-1850 iron gates and railings for the war effort, with a few exceptions made for items of particular historic interest, usually elaborate gates.

Eye witnesses reported council workmen arriving with sledgehammers, cutting equipment and lorries, taking everything in their path, leaving only stubs. The iron was loaded onto council lorries and driven off, supposedly for despatch to steel works around the UK, where it would be melted down and recycled.

In fact the fate of much of the cut down ironwork remains a mystery and there is considerable scepticism over how much iron was recycled for munitions and how was much merely dumped (see Whatever Happened to our Railings?).

The loss of this ironwork was keenly and long felt and replacing lost iron railings with traditional style replicas is often the first objective of any restoration. To meet the demand for replacing lost iron gates and railings, a number of specialist ironwork firms will supply ironwork made using traditional techniques and designs. Many of the original pattern books have survived and can be used to choose a style for a modern railing using traditional materials. 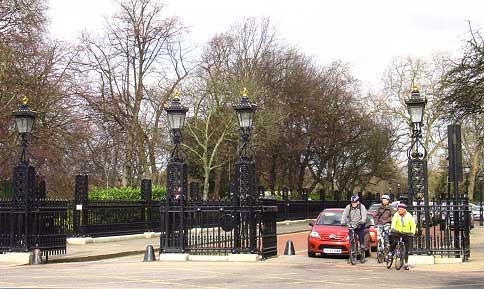 Replacement gates to Regent's Park at Park Square East. By the early 20th century, the original John Nash gates and railings at Park Square were in a poor state and were replaced with utilitarian versions. Work to replace them in the original style was completed in 2002, when the new gates were opened by HRH the Prince of Wales.

Victorian and. Edwardian railings were made by casting iron in sand moulds and finished with a decorative finial on the top of each rail. Cast iron, although more brittle, seems more resistant to corrosion than wrought iron, possibly because of its foundry skin and higher carbon content. Wrought iron railings of any age are generally covered in paint and liable to a build-up of rust in water although properly cared for wrought iron will last just as well if not better than cast iron. Gates and window balconies often featured swirling wrought iron decorative motifs.

When deciding to restore the gate or railings around a park or garden, any historical records of the appearance of the original ironwork will be very useful. If any part of the original railings has survived, this can be analysed for the original paint type and colour.

Wrought iron is made by heating the material to red heat in a furnace and then hammering it on an anvil.

Historically, wrought iron was made by a special process that included slag which was beaten into the iron to give a grained appearance, making the finished product almost resemble wood. This grained wrought iron had a very high tensile strength. At one point wrought iron was used for almost all quality ironwork in construction.

It is made by remelting pig iron, often along with substantial quantities of scrap iron and scrap steel. The final shape is achieved by pouring the iron into moulds.

Traditional Victorian cast iron was made by sand-casting, where the molten liquid was poured into a sand-based mould and left to cool.