So What Really Happened to our Railings?

When iron gates and railings were cut down to help the war effort in the 1940s, what happened next is a mystery and has been a matter of conjecture for many decades. 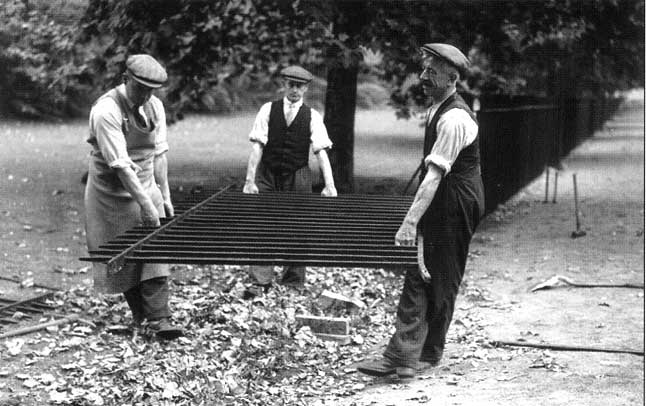 Steelworks at places like Port Talbot, Shotton, Sheffield and Motherwell had been in business since the start of the twentieth century and their histories are well documented. Yet, while the removal of the iron is recounted by hundreds of eye witnesses, there are no similar reports of the lorries arriving at the steel works with large quantities of railings and gates to be loaded into the blast furnaces. Lord Beaverbrook was nothing if not thorough and his logistics operations would have been geared to deliver the iron to the steel works.

So what did happen? One school says the iron collected was unsuitable and could not be used. This seems unlikely as recycled iron is a key component in the steel industry. Another more likely explanation is that far more iron was collected - over one millions tons by September 1944 - than was needed or could be processed. Certainly the huge underground munitions factory Beaverbook set up at Corsham in Wiltshire ran far below capacity for its short life.

Faced with an oversupply, rather than halt the collection, which had turned out to be a unifying effort for the country and of great propaganda value, the government allowed it to continue. The ironwork collected was stockpiled away from public view in depots, quarries, railway sidings. After the war, even when raw materials were still in short supply, the widely held view is that the gaovernment did not want to reveal that the sacrifice of so much highly valued ironwork had been in vain, and so it was quietly disposed of, or even buried in landfill or at sea.

This is the view of John Farr, author of a recent article in Picture Postcard Monthly, ('Who Stole our Gates", PPM No 371, March 2010). In it he says that only 26% of the iron work collected was used for munitions and by 1944 much of it was rusting in council depots or railway sidings, with some filtering through to the post-war metal industry. Yet the public was never told this.

Was there an official cover-up? Farr states that "most of the pertinent records at the Public Records Office had been shredded" and that hints remain that a cover-up took place to prevent names other than Beaverbrook's being linked to this sad pillage."

In London the persisting explanation is that it was loaded onto barges and dumped in the Thames Estuary, an account which seems to have originated in a letter to the Evening Standard by journalist Christopher Long in 1984.

Long wrote "I believe that many hundreds of tons of scrap iron and ornamental railings were sent to the bottom in the Thames Estuary because Britain was unable to process this ironwork into weapons of war."

He said this information came from dockers in Canning Town in 1978 who worked during the war on lighters that were towed down the Thames estuary to dump vast quantities of scrap metal and decorative ironwork. They claimed that so much was dumped at certain spots in the estuary that ships passing the area needed pilots to guide them because their compasses were so strongly affected by the quantity of iron on the sea-bed. However, there are no first hand records of this and the trail remains elusive.

Other more fanciful explanations have also surfaced: one WW2 aircraft website has an account from a member saying that, running out of munitions towards the end of the war, the bombers flying over France were simply loaded up with pieces of cut-down railings, which they dropped on the enemy. Another has the ironwork used as ballast in ships to Africa with unverified reports that houses can be found in ports on the West African coast, surrounded by decorative Victorian cast-iron railings.

Meanwhile the country remains littered with the stumps of removed railings. Recent years have seen a determined effort by many communities, led by residents who recall the removal of the original ironwork, to restore the gates and railings they lost over 60 years ago.