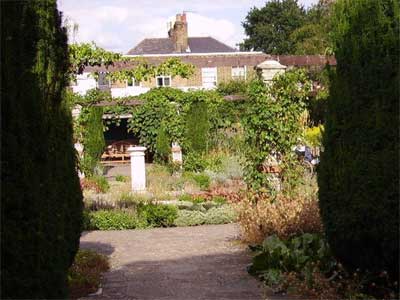 After passing the hospital enter Ravenscourt Park through the gate at the end of the road.

Bear right and walk along the path at the bottom of the lake. Where the path divides, take the right fork towards the stable block, which has a café and accessible toilets. The greenhouses which take part in Open Garden Squares Weekend are just behind it to the right. Looking half left, there is a white building, once an entrance lodge and now a private house. The slight rise in land level before it is the site of Ravenscourt House, bombed in 1941.

Facing the stable block, take the path to the left to the Walled Garden, which has 18th-century iron gates.

The park is on an ancient site, originally called Palingswick Manor. Alice Perrers, Edward II's mistress, lived here in the 14th century. A new manor house was built in 1650 and sold in 1747 to Thomas Corbett, who changed the name to Ravenscourt (a pun on his name - corbeau is French for 'raven'). In 1812 the manor was owned by George Scott, the builder who developed St Peter's Square, and the garden laid out by leading landscaper Humphry Repton. The house and 30 acres were bought by the Metropolitan Board of Works in 1887, and laid out by JJ Sexby as a park, which opened to the public in 1888. There are many remnants of older planting throughout the park, including plane and cedar.

The walled garden, which in summer is full of climbing roses and colourful perennials in a formal circular layout, is tended by a group of volunteers, in partnership with the park staff.