Winfield House, home of US Ambassadors, has private gardens second in size in central London only to Buckingham Palace. HAZELLE JACKSON reports on the recent Trust visit ...

Members of the LPGT were fortunate to enjoy a tour of the grounds of Winfield House, the London residence of the US Ambassador, on a glorious sunny day in early June. The house, which stands in over 12 acres of grounds on the western side of Regent's Park, has the largest private garden in central London after Buckingham Palace. Head Gardener Stephen Crisp, who has worked there for over 20 years, showed members round.

Stephen recounted how he first came to work at Winfield House. He was working at Leeds Castle in Kent in the late 80s, when he was told about a large London house whose owners needed someone to "look after the garden and arrange the house flowers".

In no time at all, it seemed, he found himself in charge of a "sleeping beauty" of a garden at the official London residence of the US Ambassador and his wife, then Mr and Mrs Charles H. Price II.

When Stephen Crisp first came to Winfield House, the further reaches of the grounds had been let go wild. Over the last two decades, with painstaking dedication allied to great enthusiasm, he has created the magnificent gardens which enhance the house today.

We started the tour at the front of the house, where Stephen explained how he had removed oppressive leylandii to make the most of Nash's sweeping entrance drive. There is a subtle American motif in the diamond-shaped ivy trained over the front gate lodge. By the main entrance he has planted magnolia and box in the flowerbeds. Next to the road at the front of the house are shade-tolerant woodland species to screen the house and provide an acoustic barrier against the traffic outside.

Inside the house, where we were offered morning coffee by the staff, Stephen had laid out some of his collection of historical reference material about the gardens, including prints, postcards and maps. (These will provide material for a book of the history of the house and grounds, currently being written with the architect and historian Marcus Binney.)

Stephen thinks John Nash was probably influenced in his layout of the site in the early 1800s by Repton and set the house and views within a pastoral landscape. Some early reference material points to the possible existence of an early "ferme ornée" on the site. Ha-ha walls still exist and Stephen has maintained the pastoral ambience with the extensive lawns at the rear of the house, relieved by two gentle mounds to create sweeping natural views.

The rear terrace, guarded by two stone eagles, leads on one side to a formal garden, where the Tudor Court used to be. It is now called the Parterre Garden. 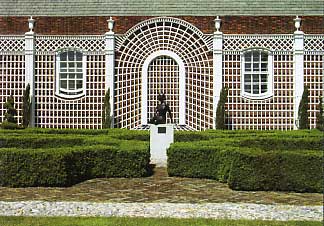 The Parterre Garden at Winfield House, with a bronze statue of former owner Barbara Hutton as its centrepiece

Laid out in 1969 by Peter Coates, it has undergone a considerable revamp in recent years. The trelliswork on the rear wall in particular has received special attention, being repainted with Sadolin, (a paint which is micro porous so the wood does not split) and is set on toggles so that it can be lifted off the wall for maintenance. The centrepiece of the Parterre Garden is a small statue of a young Barbara Hutton, the heiress who sold the house and grounds to the American government in the 1940s for $1. The statue was found, by chance, by Ambassador Price and his wife on a visit to Italy in 1979. 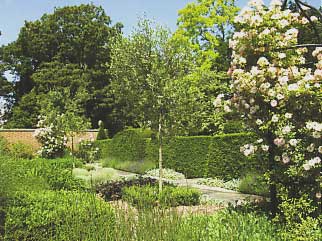 The Summer Garden at Winfield House

Nearby is the Summer Garden (formerly the Rose Garden, laid out by Sir Peter Shepherd in 1981). This is now an arid garden, inspired by Frank Lloyd Wright's use of stained glass, featuring drought-resistant plants interlocked to form 3-D coloured shapes.

A circuit of the Winfield House lawns reveals the subtleties of Stephen's planting of the shrubberies. New vistas continually open up new vistas of the house. There are views also of the minaret and dome of the Central London Mosque, which overlooks the gardens. Some trees were lost in the storms of 1987 and 1990 and Stephen has planted over 100 new ones, mainly European hardwood to enhance the pastoral views across the lawns from the back of the house.

On the opposite side of the house to the Parterre Garden, a small pond and fountain has been installed, designed by Morgan Wheeler. One of current Ambassador Mr Robert Holmes Tuttle's contemporary art installations stands on the terrace here.

Winfield House's greenhouses are used to grow around 6-7,000 plants each year; half in plugs. Stephen looks after the glasshouses himself and irrigates the plants by hand.

There are some novel touches: automatic air vents and benches which slide in and out for ease of access. Heating is by gas-fired boilers and kept to a minimum of 50şF in winter. Stephen spends around an hour each day in the glasshouses, where the plants grown include cyclamens, primulas and cinnerarias. He estimates this enables him to spend less than £2000 per annum on plants for the house and grounds.

There is no borehole in the gardens and Stephen relies a good deal on mulch to keep the soil weed-free and stop it drying out. Woodchip from local tree surgeons is recycled into mulch and Stephen and his team compost all their green waste. Fallen leaves are not raked but blown back onto the beds.

This wonderful oasis is maintained by just Stephen and two assistants and is, he says, "all about low- maintenance techniques, knowing where to cut corners and using appropriate planting and mulching".

Stephen's aim is to enhance a naturalistic landscape and provide vistas which continually delight and draw visitors on.

The view of Trust members was that he has succeeded magnificently.

The House that Barbara Built

Winfield House in Regent's Park is the official London residence of the United States Ambassador to the Court of St James. 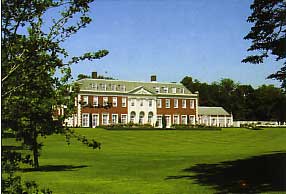 Rear view of Winfield House from across the main lawns

When architect John Nash laid out The Regent's Park in the early nineteenth century, eight grand villas were built (out of an originally planned 50). The largest was called Hertford Villa, commissioned for the 3rd Marquess of Hertford and designed by the 25-year-old architect Decimus Burton. His building, "Italianate in style and deriving a certain grandeur from its hexastyle portico of Corinthian orders" was on the site where Winfield House now stands.

Hertford Villa was actually two buildings connected by a single-storied hall, "the tent room", spacious enough for "magnificent receptions`. On the wall next to the tent room the Marquess installed in the 1830s a huge clock, with the life-size figures of Gog and Magog striking the hours. Burton had rescued this from the demolished St. Dunstan's Church in Fleet Street and he now gave the name St Dunstan's to the house. (The clock with Gog and Magog striking the hours has since been returned to a completely rebuilt St. Dunstan's Church.)

In the early twentieth century St Dunstan's became the first premises for a charity for blind servicemen founded in 1915 by Sir Arthur Pearson, the newspaper proprietor. The villa housed a training centre and workshops for Pearson's new 'blind army', and eventually the house gave its name to the charity.

Later St Dunstan's House lay neglected and in the 1930s was damaged by fire. It was then purchased and demolished by the American Woolworth heiress Barbara Hutton, who built a completely new house on the site, on the footprint of the old.

Hutton named her residence Winfield House after her grandfather Frank Winfield Woolworth. Several thousand trees were planted in the 12- acre grounds at this time.

Barbara Hutton did not enjoy Winfield House for long. During WWII the house was boarded up and used by an RAF barrage-balloon unit. After the war ended , the house was in a poor state and Barbara Hutton sold it to the American government for the token sum of one dollar.

The house was eventually refurbished and  since 1955 has been the official residence of the American ambassador in London.

US Ambassadorships to major capitals are often a reward for political support and service and many ambassadors have been wealthy businessmen and women.

Among the better known US Ambassadors to London, Walter Annenberg, Ambassador from 1969 to 1974, was a billionaire media magnate, who, with his wife Lee, lavished a considerable amount of money on refurbishing the house and its interiors and contents. Mrs Annenberg later gave an endowment for the maintenance of the aesthetic of the house.

The current US Ambassador, Mr Robert Holmes Tuttle, is a successful businessman and former aide to the late President Ronald Reagan and is close to President Bush. Mr and Mrs Holmes Tuttle collect modern and contemporary art, some of which is currently on display in the house and grounds.

Ambassadors come and ambassadors go but Stephen Crisp has been the Head Gardener at Winfield House since 1987.