Walk on the Wild Side

JOHN GOODIER explores the parks of Brixton and Herne Hill

Brixton is an ancient name, but Brixton is a new town. The name is that of a stone that marked ; the meeting point of an Anglo-Saxon Hundred, an ancient local government unit. In the early 19th century, a market and later housing developed around the site, and in time a town took shape. Let me take you on a walk round Brixton.

Turn right as you leave Brixton station, under the railway bridges. We soon reach Max Roach Park with the First Child statue by Raymond Watson enlivening the street corner. `Walk on the Wild Side" is in fact a tree trail that includes Max Roach and the next open space, and some of those encountered at the end of this walk.

Angel Town Estate, recently and successfully refurbished, is the next part of the trail. The espalier trees trained on wire here were planted by the Housing Department on Parks Department land; but I gather that got sorted out....

Turning off the main road Mostyn Park is reached. This is a hilly area of grass with a good selection of wild flowers in the grass; speedwell, penny cress, dandelion, goose grass and more.

Leaving Mostyn Park we cross the end of a row of new single-storey disabled-friendly homes, with a raised flower bed and parking space in the front yard. Then we pass a street of fine 19th century terraces into a road of 30s gable fronted houses; a quick snap shot of the mix of housing styles found in Brixton.

Next up is Dan Leno Park with raised grass and a sunken area with seats nestling below the imposing church of St John the Divine. 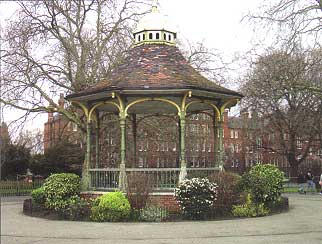 Through a maze of roads, reflecting the way different estates were developed, with no thought that the neighbouring estate would be developed quite soon, we reach Myatts Fields. This was given to the local authority as a park by the Minet family, who came to the area as Huguenot refugees. Designed by Fanny Wilkinson in 1882-9, it still has its original layout of paths, a bandstand and a roundhouse shelter.

To the south used to be the Loughborough estate; the name is now given to a municipal set of sixties white concrete tower blocks containing flats. There is a lot of community art round here and between the blocks on Barrington Road are two good private shared gardens.

To the south of the estate is Wyke Garden, a play area. Under the railway and down Loughborough Park road, we reach Loughborough Park. This is more wooded than the other small parks seen so far.

Some more roads going not exactly where we want to go and another railway line bring us to Herne Place, a small garden by a housing estate with trees, grass and some perennial planting. I particularly liked two groups of privet bushes, trimmed to be cylindrical, standing about like loitering teenagers. 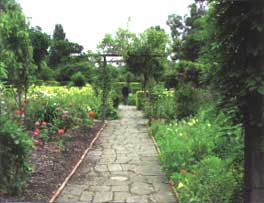 Brockwell Park - Worth A Visit?

Next is Brockwell Park, which is currently being restored with a Heritage Lottery Fund grant. It has a small mansion house (now a café), ponds, a walled garden, sports facilities and fine views.  I hope we can organise a Trust visit in a year or so to see what they have done with their grant.

Coming out of Brockwell Park on the middle of the west side, we cross into the Tullse Hill Estate. This is a typical dark red brick LCC estate with a generous provision of grass. Low walls supporting a tall pergola structure mark the land between the blocks as semi private without spoiling the views in or out and without appearing exclusive.

Some more weaving through residential streets brings us to Holmewood Gardens, where a small triangular ish area with an adventure playground, gardens and a dog exercising spot forms part of the Holmewood Home Zone, a 20 mph limit traffic scheme.

We then emerge onto Brixton Hill, and it's downhill all the way to the station.

On the east side of the road is Rush Green. This is common land enclosed under an Act of 1806 which forbade building on a broad strip along the road. Legally Rush Common continues as far as the Angel Estate, but some parts have been built on. In 1947 the local Authority was empowered to enforce this "proscribed land" provision as they saw fit. The Council is slowly and incrementally acquiring the land and the area by the Roupelle Gardens Estate is now public. The large gardens at Tudor Court and by the Methodist Church are private but protected.

Reaching central Brixton there is the fine classical Greek church of St Matthew, built with its own act of Parliament, as it is on Rush Green. The church was consecrated in 1824 and became the parish church a year later. The burial ground has been made into a Peace Park with formal bedding. The Budd memorial still stands; a magnificent structure. 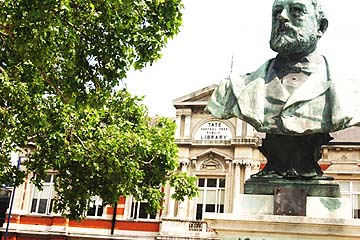 Two pocket memorial parks end our walk. Tate Square is the forecourt to the Tate Library, which has a good stock of local history books for sale. It no longer has a fountain, but, the first time I went to Brixton, someone had put detergent into it and it was foaming!

Next to this is Windrush Square, commemorating the Jamaicans who came on the Windrush. On their arrival, they were lodged in a deep air-raid shelter at Clapham and taken to the Labour Exchange at Brixton the next day. The Jamaican community remain in the area as part of the lively and vibrant culture of Brixton.

Now, assuming the Council is still using its discretion under the 1947 authority, Brixton Station will still be there on Rush Green for our return home.