Which Came First - the Reservoir or the Inn?

Which was named first - the Welsh Harp Reservoir or the neighbouring Welsh Harp Inn? London Landscapes reader Mrs Samuel referred in a letter to John Goodier's article A Walk in North-West London (London Landscapes 19). John said that Brent Reservoir, popularly known as the Welsh Harp, was so named after a local inn demolished to make way for the M1 motorway in the 1970s. Mrs Samuel's version, shared by several authorities, is that reservoir came first, being built in a shape that resembles a Welsh harp and so giving its name to the inn. Both versions can be found on the internet depending on which authority you read.

So Hazelle Jackson decided to do a little digging herself into the origins of the name. Here are the results.

In the late 1820s the owners of the Regent's Canal began to encounter problems in keeping water in the canal's summit level at Camden Town. To remedy this they built two high-level feeder reservoirs in north London. One of these was created in 1834-5 by damming the River Brent near its confluence with the Silk Stream, west of the Brent Bridge on the Edgware Road. This flooded land at Cockman's Farm between the Edgware Road and Old Kingsbury Church to create a vast lake, 2˝ miles long, 1 mile wide, and 69 acres in extent. It was called the Kingsbury Reservoir after the neighbouring hamlet.

The contractor was William Hoof of Hammersmith and the engineer was James Morgan (an assistant in John Nash's office responsible for the design of the Regent's Canal in 1820). The reservoir's first stage was completed in 1835, followed by further work in 1837 and again in subsequent years. The short metal posts found along the shore of the reservoir today, decorated with the Prince of Wales's feathers, mark its fullest extent of 400 acres in 1854. In the 1890s the water level was lowered reducing the reservoir to 195 acres, and in the 20th century it was reduced again to 110 acres.

The Edgware Road, which crossed the Brent River and the Silk Stream in Hendon, followed the line of the original Roman road, Watling Street, to the Welsh border in North Wales. By the 18th century this road was a major stagecoach route, with nine coaches a day passing through and it was tumpiked in 1711. The road crossed isolated farmland, making it a popular haunt for highwaymen and footpads preying on travellers: a coaching inn would have been a welcome sight here. (The evocatively named Shoot Up Hill is only a short ride south of Kingsbury on the road.)

The first reports of a coaching inn date from 1751, with accounts of the Harp & Horn standing on the Edgware Road by the Brent River crossing, long before the reservoir was built. (A History of the County of Middlesex: Volume 5 (published in 1976 by Boydell & Brewer Ltd and sponsored by the Victoria County History project) states: "the Welsh Harp near Brent Bridge, mentioned in 1803, seems to have been the Harp and Horn recorded in 1751" and gives a reference to a document held in the Middlesex Records Office. 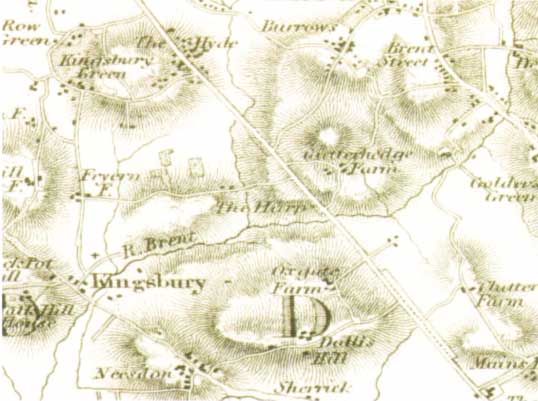 Map of the Edgware Road and the Harp at Brent Bridge, published 1825

Differing records give this inn differing names in the early 19th century. The British Genealogy website poignantly records an entry in the baptism register of St Mary's, Hendon on 30 January 1803: 'Harp, Isabella, so named because found by the sign of the Harp on the Edgware Road'. [Another entry in 1805 records Jane Brent, 'so called from the River Brent near which she was found.'] An early print of the inn on Brent Council's website, is captioned: 'The Welsh Harp Inn in 1810'. However, it is not clear if this map of the northern environs of London attributed to 1832 shows a building called The Harp, on the Edgware Road at the Brent Bridge, before the reservoir was constructed. 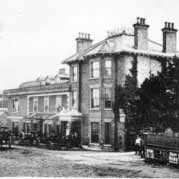 The Old Welsh Harp Tavern
Photograph from The Brent Magazine February 2005
In the 1850s, after the reservoir was constructed, the inn was even briefly known as the Irish Harp, when the landlord was an Irish music-hall artist, Sam Collins. However it took an enterprising former soldier called William Perkins Warner to really put the Welsh Harp inn on the map. In 1859 he purchased the inn and fishing rights on the Kingsbury Reservoir and rebuilt the original premises, making it bigger and better. He called it the 'Old' Welsh Harp Tavern, to distinguish from an upstart rival, the Upper Harp Inn, up the road and first built in the 1850s.

The reservoir was used for water sports and the area was also very popular with Victorian naturalists. Locally the Warner family promoted a range of attractions including boxing matches, pigeon- and duck-shooting. There was even a music hall and a menagerie at the inn. (Great excitement was aroused when a bear escaped in 1871.) Kingsbury Race Course was where the first mechanical hare, for greyhound racing, was used in 1876. In the winter there was ice skating.

By 1870 the area was so popular with Londoners that the Midland Railway built the Welsh Harp Station to transport day-trippers. At its height in the mid 1880s crowds in excess of 25,000 people could be expected on a bank holiday weekend. By 1900 however the surrounding area was rapidly becoming urbanised and the day-trippers were in decline. The Welsh Harp station closed in 1903. 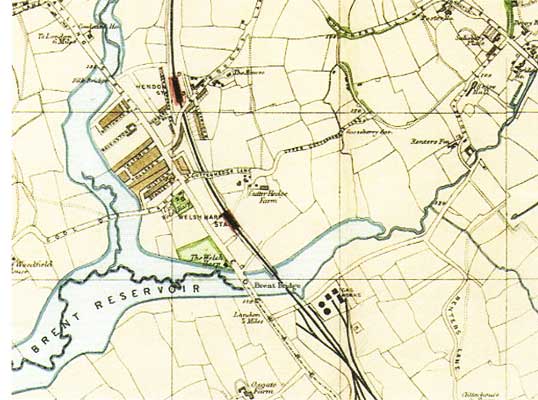 In 1921 part of the reservoir north-east of the Edgware Road was reclaimed and the River Brent and the Silk Stream culverted and in 1926 the North Circular Road opened, crossing the Edgware Road at Brent Bridge. The Old Welsh Harp inn still stood alongside the road and was rebuilt in 1937 as a pub.

Urbanisation continued around the reservoir during the 20th century. In 1965 the Welsh Harp Open Space was designated after Willesden Borough Council unsuccessfully tried to build a large cemetery on the west side. The pub which had survived two world wars did not survive the motorway age: in 1971 it was demolished to make way for Staples Corner at the start of the M1 motorway.

The Welsh Harp name lives on with the reservoir, which, although now owned by British Waterways and officially called the Brent Reservoir, is still universally known by the public as the Welsh Harp. No longer actively used for the purpose for which it was built - feeding the Regent's Canal - it is smaller than in its heyday but still a popular centre for water sports. It even hosted the 1948 Olympic rowing events. It is also listed as a Site of Special Scientific Interest by the Nature Conservancy Council. The surrounding open space is managed by the London boroughs of Barnet and Brent and includes Silver Jubilee Park. A long-term leisure redevelopment plan was started in 2006 by British Waterways and Brent and Barnet.

Have we definitively solved the question posed at the beginning - which came first the reservoir or the inn? No - but there is no evidence that the reservoir was called the Welsh Harp before the construction of the famous tavern of that name in 1859. This was built on the site of the earlier coaching inn called the Harp or the Harp & Horn. All the data therefore strongly suggest that the shape of the reservoir appears to be coincidental, and that the name follows that of the inn.

For more on the reservoir and the surrounding open space see: http://www.bb-environment.org/Brent%20Water/Welsh%20Harp.htm