A Walk round Wanstead Park

This interesting and historic park is well worth a visit, says JOHN GOODIER 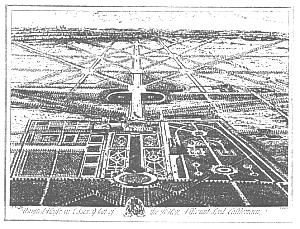 Wanstead Park in its heyday

I had not been to Wanstead Park, at the south end of Epping Forest, before the Trust's Study Day in 1999, but I have been back since, probably once a year in a variety of seasons and weathers. it is an ancient site with evidence of the remains of at least one Roman villa, but the landscape, as it exists today, is basically that developed by Sir Josiah Child, a governor of the East India Company, who spent "prodigious" sums on the grounds in the seventeenth century.

His son, Sir Richard Child, later 1st Earl Tylney, replaced the old Tudor house in 1715 with a Palladian mansion designed by Colen Campbell and continued work on the park, as did his grandson, the 2nd Earl Tylney, who built a grotto boathouse by the lake in the early 1760s. Garden designers George London, Capability Brown and Humphry Repton all had a hand in the landscape during the 18th century. Some of the plantings mentioned in Repton's Red Book for the park survive today.

In its heyday Wanstead Park was one of the great designed landscapes of England but tragedy lay in wait.

It all came to an abrupt end after the estate was inherited by Catherine Tyiney-Long, the daughter of the Earl's nephew, in 1794. Catherine, one of England's richest heiresses, made a disastrous marriage in 1812 to the Regency rake William Pole-Wellesley, a nephew of the Duke of Wellington.

By 1822 Pole-Wellesley had spent his wife's entire fortune and was declared bankrupt. In 1824 the contents were sold and the house demolished to pay his debts. Despite a long legal battle later generations were unable to regain control of the estate, which was acquired by the Corporation of London in 1881.

Today part of the land is a golf course. Although we were able to get onto this part of the site on the study day, it is not normally accessible. The remainder of the site is managed by the City of London as part of Epping Forest; but it is a different landscape to the main part of Epping Forest, which I described in an earlier article. The site of the house is visible from the churchyard of St Mary's in Overton Drive and the octagonal lake remains.

Wanstead is a big park (140 acres) and there are two walks which can be combined. Starting at Wanstead Station, the first place to see is the adjacent George Green, where avenues of sweet chestnuts recall the sort of avenues that once graced Wanstead Park. A short detour to the north will bring us to Christ Church, a 19th century church with good planting surrounded by mown grass (playing fields). But our main interest is to the south, where Warren Road leads between two parts of the golf course and into the park. 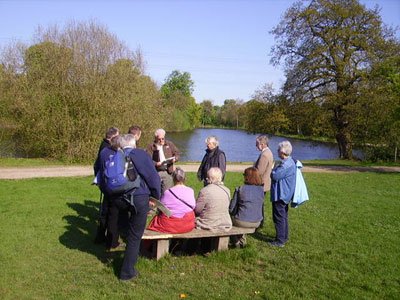 Trust members at the Ornamental Water

The first part of the walk is to proceed round the extensive water feature known as the Ornamental Water at the eastern side of the park. The overall shape is quite unusual but is derived from various features. There is a mock naval fort, once used for entertainments and fireworks. A ruined grotto boat house lies partly hidden in the woods - and even more hidden by the security fencing that has been put up to protect it from further decay and vandalism.

At one point the lake suddenly forms a tongue of water heading due east. This lines up with an opening in the woodland on the opposite side of the lake which aligns with the original view from the eighteenth century house. After this detour, the lake contracts to a narrow strip of water. It is noticeable that the water level in the lake is lower than it has been in the past, and there may have been some alteration in water supply. The lake is topped up when needed. Also apparent are the large trees and shrubs growing on the lake side of the path and obscuring the views.

Crossing over the footbridge, we follow the lake, passing one of the Roman sites just before we come to the open vista towards the site of the former house. The width of this gives some idea of the vastness of the landscape which is difficult to feel in woodland. One could now continue the walk round the lake and return to Wanstead town.

We will instead continue up the vista to the edge of the golf course. Two mounds, once viewing points, are hidden in the woodland here. Years of children running and cycling over them have made them lower and a dense growth of trees has blocked the view. If you go looking for them they are hidden now behind yew hedges. From the top of the vista, having stopped to look back towards the lake, we take a path towards the Temple. This eighteenth century garden feature has been recently restored and contains a small museum with many interesting photographs of the gardens and various artefacts found in the grounds. The history of the site is told in a series of posters. 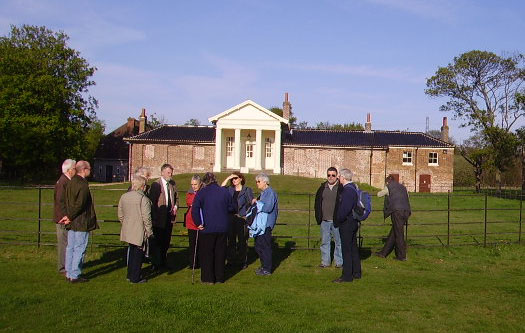 To the south of the Temple is an area of grass. This now looks quite wild, but in the 1930s a community tennis project (as it would now be called) was set up to provide exercise and relaxation to those affected by the depression. There is a tea hut by the lakes, where we can take refreshment before we begin the second part of our walk. Just before we do this, we can go down by the dam going east to the site of the other Roman remains. Bits of little red tiles can be seen on the ground. Recent non-invasive archaeological investigations have shown indications of walls and of a possible earlier landscape. 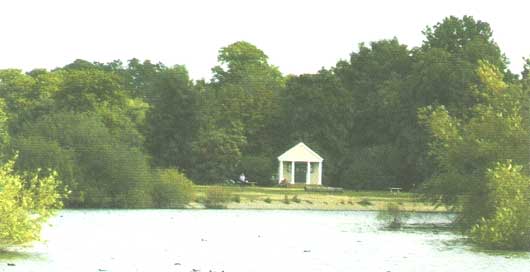 The view across the Heronry Pond to the refreshment kiosk

The main aim of the second part of our walk is to explore the series of ponds along the southern edge of the park. Like the Ornamental Water, these ponds are low in water, but this is mainly due to leakage. The first, known as the Perch Pond, is extensive and is used for fishing. The Heronry Pond was paved early in the 20th century and was a popular boating lake until a WW2 bomb damaged it. A failed repair means it now leaks a great deal, which is very obvious in dry weather. The last pond is called the Shoulder of Mutton Pond and is located just before you enter Reservoir Wood - which says it all!

The paths back to the southern side of the ponds here are ill defined.

From the end of Reservoir Wood there are buses back to Wanstead or, if one has the energy, one can walk across Wanstead Flats to Forest Gate station on the line to Liverpool Street.

Wanstead Park has an interesting history and the outline of the main features are easy to see. We hope to organise a visit as part of our summer programme later in the year. If you go exploring in Wanstead Park, you are advised to wear stout footwear, as the paths can be muddy, as 1 found when Ralph Potter of the Friends Group took me round in the spring. The Trust has some copies of the 1999 study day report for sale, if you want to know more.