Walpole Park is the jewel in the crown of Ealing's parks. It is located in the heart of Ealing's Heritage Quarter, which includes the famous Ealing Film Studios. The park itself is a backdrop to Pitshanger Manor, which was designed by Sir John Soane in the early 1800s. Now Ealing Council plans to regenerate this run-down but much-loved park to reveal its early 19th-century beauty. 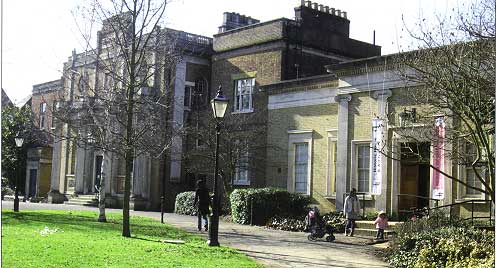 Pitshanger Manor in Walpole Park, Ealing. The park was created in 1901 from the original grounds of the house. To the right is the restored public library extension of 1940, which now houses the Pitshanger Manor Gallery, West London's largest public gallery space.

The council has just won approval for the scheme from the HLF's Parks for People programme with a £210,000 development grant to work up detailed proposals. This should result in a further HLF grant of £1.77m for the park.

The Grade I-listed Pitshanger Manor and its forecourt will be subject of a separate application to HLF under the Heritage Grant programme, but the vision for the house and park are part of an integrated master plan.

Walpole Park is named after Sir Spencer Walpole, who sold it to Ealing UDC in 1899. The 12-hectare Grade II park in West London, which is included in the English Heritage Register of parks and gardens of special historic interest, contains an ornamental bridge remodelled to a design by Soane, a pond on whose banks he sat and fished with his friend Turner the painter, a rose garden and a boating lake.

The original house and grounds were bought and renovated by John Soane, the celebrated architect, in 1800. During the 19th century the estate passed into the Perceval Walpole family and in 1899 Sir Spencer Walpole sold it to UDC of Ealing for £40,000. It was opened to the public as a park in 1901. The Borough surveyor, Charles Jones, who negotiated the sale, is commemorated in a plaque in the park today. Jones designed the tree-lined avenues, paths and flowers in the wider park and planted the sides of the pond nearest to the house (originally much deeper) with plants and shrubs. This pond is overlooked by a Grade II* ornamental bridge remodelled to a design suggested by Soane.

Aims for the restoration include re-connecting the Manor House with its regency landscape, by restoring links, conserving listed and other historic structures and recreating the Regency planting design as a setting to the manor. The restoration will re-open lost views, protect and maintain important views and minimise intrusive views. It is also planned to develop new community uses for the kitchen garden.

A new Friends group is being set up to support the project and will take an active part in arranging events and activities. The group needs people who are willing to contribute their time and effort. If you would like to Set involved please email your details to walpolefriends at yahoo dot co dot uk.

In 1800, the architect John Soane purchased Pitshanger Manor House in west London to build his own country villa. He demolished most of the existing manor, apart from an extension designed in 1768 by his first employer, George Dance. He created his own home in its place, using it as a showcase for his imaginative style of architecture, with its references to classical detail and innovative use of light and space.

The Grade II*-listed bridge at its northern end and the pond itself were in existence before Soane bought the property and Soane reworked the bridge to give it an appearance of great antiquity to match faux Roman ruins which he built just north of his house. A large antique stone bench on the northern perimeter wall is also listed Grade II.

Following its completion in 1804, the Soanes used Pitshanger Manor House as a weekend retreat and a place of entertainment. It also accommodated a growing collection of paintings, books, architectural drawings and fragments, later to form the collection now at Sir John Soane's Museum at 13 Lincoln's Inn Fields. For further information visit www.soane.org

In 1810 Soane sold the house and by the end of the century it had passed into the hands of the Perceval-Walpoles, two leading political families who had intermarried.

It was Sir Spencer Walpole, son of Lady Isabella Perceval and Spencer Horatio Walpole, who sold the house to Ealing UDC for £40,000 in 1899, Middlesex County Council contributing a quarter of the cost. In 1901 the grounds were opened to the public as Walpole Park and the building, with alterations by Charles Jones, became Ealing's Public library.

In 1940 the lending library building on the site of Soane's mock Roman ruins was rebuilt and, when the library moved to the Ealing Broadway Shopping Centre in 1985, this became the Pitshanger Manor Gallery, now the largest public art gallery space in West London.

Since 1985, the interiors of the House have been undergoing restoration to reveal their original splendour. Extensive documentation at the Soane Museum, including bills, correspondence with contractors, diaries and drawings, has given an authentic picture of the house in Soane's time and further restoration is planned.

I am part of a team working on a major conservation project for Soane's masterpiece, his country house at Pitshanger Manor and the grounds, now Walpole Park, Ealing, for Ealing Council.

John Haverfield the younger advised Soane and produced some plans and we know that he was often introduced to Soane's clients. The landscape at Pitshanger which resulted was an early Regency villa landscape, a miniature picturesque design with lawn, shrubberies, exotic trees, flower garden, kitchen garden, serpentine lake and park. There is material at the Soane Museum and a few other leads, but it seems there has been relatively little written on Haverfield.

If anyone has researched Haverfield, his work with Soane, or perhaps his gardener George Angus, I would be very pleased to hear from you.