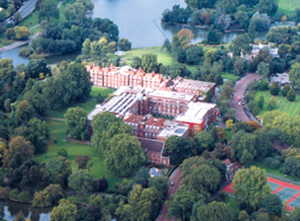 The Friends of Regent's Park and Primrose Hill, together with other organisations and individuals, are trying to squash a Royal Parks proposal to bring five-a-side football to the Outer Circle. At the moment, there is a golf and tennis school west of the zoo which, with three courts and a number of golf nets, has for decades served a steady flow of people of all types who want to learn one of the games or play tennis, when the coaches do not need the courts. The layout is low key and scarcely noticeable to visitors who seek the peace and greenery of the park.

The Royal Parks have gone out to tender for sports facilities on a site further west and their preferred bidder would bring a number five-a-side artificial football pitches and associated facilities. Such a scheme would generally serve younger men, not the more inclusive range of age and sex of the tennis school, which would disappear. Five-a-side is a noisy game and its enjoyment, including socialising, could disrupt the neighbourhood including the American ambassador's residence, which is located nearby. The proposed developer's existing centres are known for a pub-like atmosphere and organised events including stag nights. The proposal would also see the loss of mature trees in a wild area which is remarkable in particular for bats and tawny owls.

Although the Royal Parks claim to have consulted widely on possible sporting facilities in the area, including local authorities, sports bodies and the Friends (who objected), it does not seem to have taken the obvious step of contacting the people who use the present golf and tennis school.

Regent's Park already boasts 39 football pitches comprising 15 for adults, eight mid-sized and 16 mini-pitches for children. These already present a plethora of goalposts and effectively force people on to paths in a large area of the park.

The Royal Parks have refused to identify the bidders for the proposed new football facilities, on the basis that the contract has yet to be awarded. The agency is under pressure to find new sources of income to help fund running costs. However, this need should not lead to changes or developments or events which fundamentally clash with the character of the parks and their neighbourhoods.

Heather Mills McCartney, wife of Beatles star Paul, has spoken out in the local press. And Friends have been writing en masse to Tessa Jowell, Secretary of State for Culture, Media and Sport, local MPs and the Royal Parks to try to persuade the agency to think again. Many local people would simply like to see the present golf and tennis school refurbished on its present site and continue to provide lessons and facilities.

Any development will need planning permission from Westminster City Council.