For a few years London's parks had a dedicated police force. PAUL DEW traces the origin and history of the LCC Parks Police and the eventual merger with regular Park Keepers.

The London County Council (LCC) - which was the first elected authority for London - was formed in 1888 to replace the Metropolitan Board of Works and, acting as a single body, to administer many aspects of life in London.

The LCC's responsibility included many of London's parks and open spaces (an area of about 2,800 acres) including Hackney Marshes, Clapham, Wandsworth and Tooting Commons to name but a few. Although parks were, by today's standards, well staffed (Battersea Park had 87 staff), the gardening and professional horticultural staff were naturally reluctant to become involved in dealing with troublemakers and time only allowed them to "work or watch" - not both.

To resolve this impasse and make sure the parks regulations and by- laws were enforced, the LCC started their own force - the LCC Parks Police. Although one source gives a founding date of 1889, the first reference to the LCC Police in the Police Review seems to be in March 1896, with a report of a meeting of inspectors, sergeants, and constables who wanted annual increases in pay and an end to hourly pay for the PCs.

Hourly pay was not however changed as this was still being quoted in the conditions of service the following year. The conditions then (April 1897) were

PCs' pay was 6d per hour plus 1/- per week duty money, sergeants 28/- per week in winter, 30/- per week for the rest of the year. Inspectors did rather better with 35/- per week rising annually by a shilling to 40/- per week. One day in seven was a rest day and there were 13 days leave per year with a pension funded by deduction from pay of 6d in the pound.

In some cases housing in park buildings was provided with rent deducted from pay and the records for quite a few parks show police in lodges. For example,

Following the trend of having large numbers of horticultural staff, police numbers were broadly proportional to park acreage. For example, both Shepherds Bush Common (8 acres) and Brook Green (just under 5 acres) had one constable, whereas Battersea Park had an inspector, a sergeant and sixteen constables. Other parks, e.g. Hackney Marshes and Clapham Common, are listed with an inspector but it is not clear if these are policemen or other parks staff.

When the police found someone breaking the parks regulations, the policy was to take particulars of the offender and report those to the head of the department, with an opinion about whether it was worthy of further action. The parks police took ordinary prosecutions to court but the LCC solicitors handled more serious offences. Arrests were only to be made for the most serious offences and when guilt was beyond reasonable doubt or the accused refused to give his name. As an alternative to other action, constables could take offenders before a magistrate or to the nearest police station. It is not clear if they were all trained in first aid but some were and there was an expectation that they would help the public and not just enforce the rules.

Uniform was issued each year with an inspector or sergeant receiving a helmet, tunic, two pairs of trousers, three pairs of gloves, (black for winter, white for summer) leggings and two pairs of boots. There was also an overcoat every two years and capes, button-sticks and brushes as required to the value of £6.10s annually.

Judging form some remarks made in 1899, it seems that the hours of work may not have covered the whole 24 hours. In that year the superintendent (not a policeman) at Victoria Park complained that the keepers could not work more than 9 hours a day or 54 a week although this park was open for 16 hours a day in summer and there were 217 acres for this staff to maintain.

Although they were referred to with police ranks, the legal status of the Parks Police was at this stage unclear. The doubt was cleared up by a decision of the LCC Parks Committee in November 1899 that the whole of the men permanently employed on constabulary duties be sworn as constables under the Metropolitan Police Magistrates Act.

The discontent over pay remained unresolved and in 1902 the Parks Committee was presented with a petition requesting a better promotion and pay system and better pay. In this the petitioners pointed out that the pay rates were lower than those paid by the Metropolitan and City police forces. However the official side pointed out that the duties were not comparable in terms of the risks and hardships involved. The question about the promotion system was side-stepped by reference to changes already made.

The conditions of service (with remarkably similar rates of pay to those paid in 1897) are quoted again the Police Review in 1905; but, although the PCs have moved to weekly pay, it is, at 27/- per week, equal to the old 6d per hour for a 54-hour week. The final paragraph mentions that there is a long list of candidates and applications are not being considered. It seems therefore that, although pay and conditions may have been less generous than for other London forces, they did not deter people for applying.

Later in August 1905 the Police Review reported the LCC's decision that the constabulary ranks were to be changed: Inspectors became Head Keepers, Sergeants became Keepers and PCs Under-Keepers with effect from the following October. Although this change may not have been welcomed by all the policemen, who were now expected to help with maintenance work, they could take the LCC horticultural exams and progress to high posts in the Parks Department.

At the same time the pay scales were varied slightly and the uniform was changed. Pictures of LCC Parks Police are quite unusual: one group photo (possibly pre-1905) shows a uniform like that worn by the Metropolitan Police with a beat duty helmet but a contemporary drawing (seen in a private collection by the author) shows a peaked cap with 'LCC Parks Police' on the band.

The new uniform is described as being based on the 'somewhat picturesque' one worn by the Foresters at Hainault Forest. Ranks were indicated by a badge worn on the coat. Details of this badge are unclear but a manufacturer's document (in a private collection) shows examples of a badge bearing a crest, the word 'Keeper' or 'Under-Keeper' and service numerals.

Although a later Police Review article (Dec. 1906) refers to PC Joy of the LCC Parks Police, this may well have been because the force had not changed over completely to the new arrangements. Likewise in March 1907 an LCC policeman wrote to complain about the way the men were treated and requested better treatment. In particular, he did not like having to pick up litter, which he considered made it hard to uphold the dignity of a police officer or the dignity of the LCC.

Steve Beamon has kindly sent these photos of the LCC's parks police. 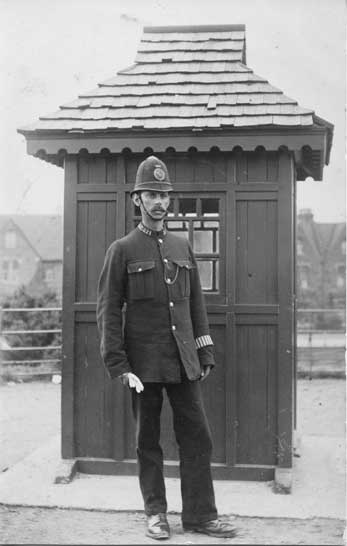 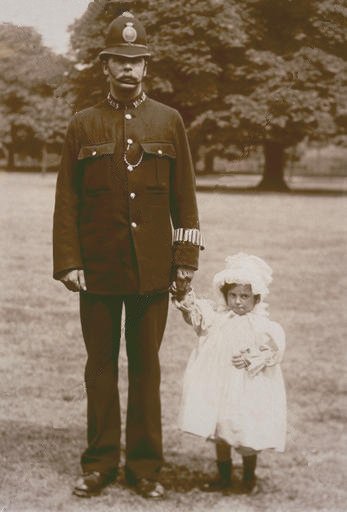