Park Hill Recreation Ground is a delightful park just to the east of Croydon town centre. It is situated on land which was originally part of the deer park of the Archbishops of Canterbury and the steeply sloping site rises to a handsome Victorian water tower on the hill at the top. 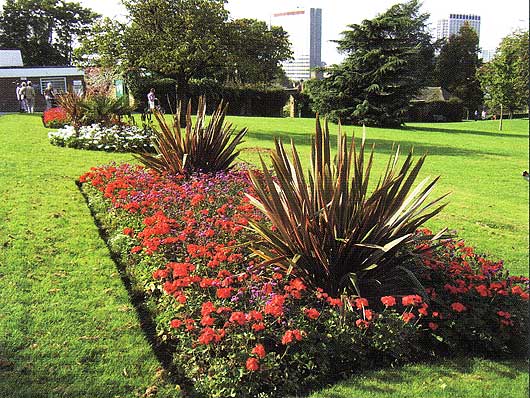 The Archbishops of Canterbury were lords of the manor of Croydon from Saxon times until the nineteenth century. They had a manor house in Croydon (the 'Old Palace') and hunted in their 227 acre deer park on land to the east of the current town centre, between Coombe Lane and the present Addiscombe Road. The Old Palace was sold in 1780 and plans made for a new palace on Park Hill; but these were abandoned when Addington Palace came onto the market and was purchased instead.

There was a resident park keeper, who lived in the first Park Hill House, which stood on the present site of Stanhope Road. The post was occupied in the fourteenth century by Sir William Walworth, best known for killing Wat Tyler, leader of the Peasants' Revolt.

Park Hill House seems to have been rebuilt several times, most recently in the eighteenth century. In the nineteenth century, one of the owners was John Wickham Flower, a founder member of Croydon Natural History Society.

Park Hill House also has a connection with Croydon's experimental atmospheric railway (a railway run using air pressure to provide power for propulsion). This operated from 1846 to 1847, when it was abandoned to be converted to normal steam traction. The railway's pumping station was removed to Park Hill House where part of it was re-erected as the entrance lodge to the grounds and the rest as stables.

In 1850 Frederick Horniman, the tea merchant, bought land known as The Warren, adjacent to Park Hill and built a mansion, where he assembled the collections now housed in the Horniman Museum. He also had a conservatory built at Coombe Cliff, as it was known, for his botanical collection, modelled after the local Crystal Palace at Norwood, which had been designed for the Great Exhibition by Joseph Paxton.

Over the years the Archbishops' deer park was gradually replaced by farming and racing. (There seems to have been a race course on the site now occupied by Chichester and Selbourne Roads.) And in the nineteenth century the owners, the Ecclesiastical Commissioners, began developing it with housing for wealthy businessmen. In 1851 a reservoir for the expanding town was bulli on Park Hill to the east of the town centre and, in 1867, a water tower was built on the hill at the top, rapidly becoming a local landmark. But there was limited public access until the land became a public park in the 1880s.

As the town expanded, in common with many rapidly Victorian expanding towns, the city fathers saw a need for open space for recreation and healthy exercise for their citizens. Between 1849 and 1883 the Local Board of Health used its limited powers to begin the task of providing open spaces for the town. Quite early on they identified the old Archbishop's deer park , much of which was still undeveloped land near the town centre, as a suitable location for a public park, but lacked the funds to proceed.

It was not until 1887 that the newly formed Croydon Corporation bought the 15 acres from the Ecclesiastical Commission for £4,000 and spent a further £2,000 laying out the park. The work was supervised, as was common at the time before the existence of a dedicated parks department, by the corporation's roads surveyor, a Mr Powell, and carried out by a contractor, Alfred Bullock.

Park Hill Recreation Ground was opened on July 11th 1888 by the Mayor of Croydon, J.W. Hobbs, a wealthy builder who lived at Nortbury Park. Mr Hobbs had planned to hold a celebratory garden party at Nortbury Park, but the weather on the day was cold and miserable, with snow reported at Norwood. The Croydon Advertiser attended the opening and, while generally approving, thought a little more money should have been spent to provide a small bandstand and seats. The only decoration was an old fountain, which had been relocated to the park and painted white. "More suitable for a cemetery than a park, "commented Mr. Ward, the newspaper's reporter. He was also concerned that the new park would be monopolized by nursemaids from the surrounding houses "pushing their perambulators along the asphalt paths."

The year after the park opened, F.T. Eldridge was elected a councillor for the East Ward of Croydon and celebrated his victory by providing a Bandstand, which became a favourite venue for concerts and entertainment.

In 1930 Croydon Corporation purchased Horniman's House, Coombe Ciff, as a convalescent home for children; in 1960, after a number of uses, it became an adult education centre. Park Hill Recreation Ground and Coombe Cliff Garden were renamed Park Hill in 1964.

The Victorian glasshouses next to Horniman's house were used by the Parks Department for many years for growing bedding and other plants but eventually the layout proved impractical and the nursery was closed down and moved to a more modern site. An Old Eng ish Garden was planted in the walled garden which Once belonged to the house; today this contains an Interesting collection of medicinal plants. Park Hill Recreation Ground today is a popular and well-used green space close to the centre of Croydon, even if the old water tower is nowconcealed by trees.

The information in this article was compiled chiefly from the website www.croydon.gov.uk.

In 1851 a large water reservoir was built under the hill at the southern end of Park Hill, Croydon, to provide a supply of clean water for the rapidly expanding town.

At the time it was a triumph of Victorian engineering: the 75-foot circular dome was constructed in cemented brickwork, the walls rose vertically for 30 feet and there were 16 arches to support the ribbed structure. When full, it held 950,000 gallons of water and was 32 feet deep. The water source was a local aquifer and the water was pumped from Surrey Street through a steel aqueduct carrying a 12 inch main into the base of the reservoir. The head of water required to supply the town came from the gravitational pull of being 293 feet above sea level. The reservoir was inaugurated on 11th December 1851 by the Archbishop of Canterbury.

The rapid population growth in the following years soon outstripped the ability of the reservoir to supply the town's needs. In 1867 a brick water tower was constructed over the reservoir on top of the hill; but even this was not adequate and a new reservoir was built on higher land at Addington Hills.

The central site at Park Hill was abandoned in 1923. It was used temporarily during the Second World War as an emergency water supply for fire fighting. 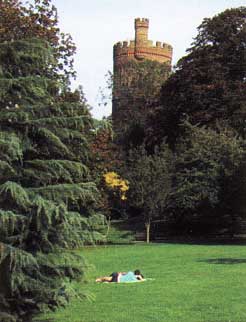 The tower remains a popular local landmark, although it is now generally concealed from view by the heavy tree cover which has grown up on the hill over the last century.