Strange man-made hills are the hallmark of London's newest park.

Northala Fields, in the London Borough of Ealing, is a completely new park and one of the most exciting and significant park developments in London for many years. Northala Fields was first opened to the public in March 2008 and officially opened by the Mayor of Ealing, Cllr lan Green, in September 2008. The new park has already won its first Green Flag. 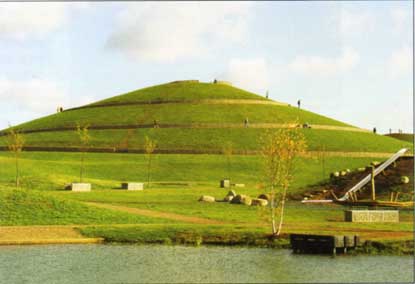 The highest of the man-made hills at Northala Park

The innovative £5.5m project began in 2000 with Ealing Council's decision to transform derelict land alongside the A40 at Northolt that was once Kensington and Chelsea's playing fields. The council agreed that local residents should be actively involved in the design of the site and the Northolt and Greenford Countryside Park Society members were key players.

The Council recruited a firm of consultants, LDA Design, led by landscape architect Peter Fink, who came up with a solution which included the creation of four man-made hills on the south side of the A40 road, which runs along the edge of the park, to shield the main part of the park from the noise and visual pollution of the road.

Mr Fink realised that a number of huge civil engineering projects were about to get under way in west London, including the redevelopment of Wembley stadium and a giant shopping centre at White City. So he and knew the builders would need to get rid of large amounts of what is known in the trade as spoil or "muck away".

"We offered to take all this spoil at our site, charging between £70 and £90 per lorryload, which meant the developers only had to haul it 10 miles rather than 100 miles to a landfill site," says Mr Fink. This process reduced the overall "carbon footprint" of sites such as Wembley and White City.

Work officially started in August 2004. In total around 60,000 lorryloads of spoil and concrete, around 500,000M3, were dumped on the site. This was used to create the four hills, while the concrete was crushed and used in gabions - walls surrounded by steel cages, which provide a spiral path up the tallest hill. Over one mile of gabion baskets were built on the hills. The hardwood timber on the gabion seats and bin tops is also recycled material. Path edgings and the fishing piers are made of recycled plastic. Soils making up the mounds are created from spoil from construction sites. The on-site landscaping was carried out by Swift Landscaping.

The tallest mound measures 26m (84ft) high. On a clear day you can see the new Wembley Stadium arch, the Post Office Tower, and the towers of Canary Wharf on the horizon.

Now Ealing is considering adding a fifth landfill hill to fund the development of additional visitor facilities which were unaffordable in the first round of development.

The new hill would raise around £1.5m to allow the construction of a visitor and education centre, a bridge over Kensington Road, toilets, a café, community hall and offices for park rangers. lt would also provide the parkside platform for the proposed bridge.