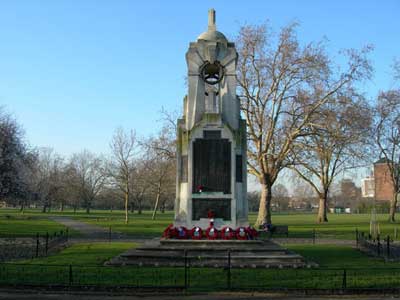 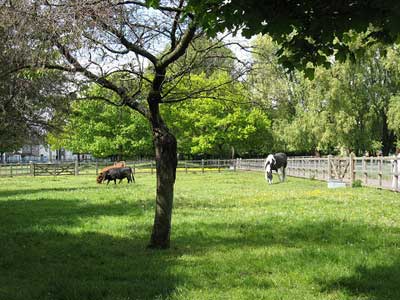 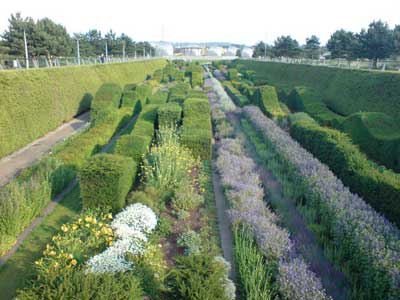 Our walk starts at Central Park in East Ham. A tall art-deco war memorial dominates the south- east corner. At the north of the park is an area of formal gardens, recently renewed. There is good complex planting, mainly of perennials, and a central fountain. There are four large urns of 1929, which once graced the Co-operative Society building and came here when it was demolished in 1989. Crossing a path we come to an informal planted garden with hollows and rocks and semi-natural planting. There is also a brand-new drinking fountain. The park has a tree trail with very sturdy markers, which in some cases have outlasted the tree.

Heading south, we come to three interesting open spaces. None of them would really count as a park or garden but they are of interest. East Ham Nature Reserve occupies the burial ground of St Mary Magdalene church. It was not open when I passed, but I have followed the path through the trees and plants on a previous occasion. Like many urban nature reserves, it is a mixture of wild and relict formal planting, and is good for, birds, flowers, and insects. I am sure it must have a fox or two. Coming in from the west is the Greenway, a walk along the northern outfall sewer from near Abbey Mills to Beckton. Across the road and under the flyover we find the remains of Beckton Alps. The ski slope has long since gone but the mound remains. There are gates through the security fencing and it is worth the climb to the top for the views overLondon. The view of Docklands rising above the sea of low buildings makes me think of Gormanghast.

Heading into Beckton we go through some of the vehicle-free paths that are a feature of this development. At the corner of Savage Gardens we enter Beckton New Park. The first part has trees and play equipment for young children. There is then a playing field.

From the far corner we go into Beckton District Park. The woodland planting is now coming into mature growth. There is also a tree trail in this park. There are surfaced paths through the park, some of which are part of the Capital Ring. We take these paths to the northernmost section, where there is a fishing lake with a variety of water birds.

Back south by road, or park paths, brings us to King George's Park. This is now the home of Newham City Farm, run by a friends group. There are wide variety of farm animals and pets. There is also some public open grass and children's play equipment.

Cundy Park is an open space with trees by the Victoria Dock Road. It is a typical small-scale local park. Crossing the Docklands Light Railway and passing Excel, where there is a good example of modern hard landscaping, brings us to the elevated bridge. Across this is Britannia Village. The village green is open grass with perimeter trees.

Over the North Woolwich Road, Lyle Park is hidden off Bradfield Road. There is a formal planted area, which leads to a football pitch, and beyond this, overlooking the Thames, is another formal area. In this are the 1924 gates of Harland & Woff shipyard, a reminder of the industrial past, that were re-erected here in 1972.

There is also a drinking fountain which is a war memorial. This is a new construction, as the arts and crafts style original in dark pink- and-green glazed tiles seems to have be badly damaged about ten years ago. The one original tile tells us that the book of remembrance is in St Barnabas Church, but that was bombed in 1941, as was much of the housing. As much of the area was not rebuilt, a park on the northern side of the main road has vanished.

Walking east to our last park we come across the memorial put up by Brunner Mond to those of its staff killed in the nitro-glycerine explosion of January 19th 1917. It also records staff killed in the two world wars. This was for long hidden behind security fencing but is now open to view, and has a detailed interpretation board.

Our last park is the Thames Barrier Park. This was opened in 2000. The landscape designer was Allain Provost of Groupe Signes, and the Architects were Patel Taylor. There is sunken area of planting called the green dock with waves of yew hedging and planting. There are lawns with trees and some hidden flowerbeds in front of the flats, which I had not known about until the Park Manager led us on a LPGT walk a few years ago. The paths and the green dock lead to the Thames, where there is a good view of the Barrier. The Pavilion of Peace (designed by Andrew Taylor) is a memorial to all from Redbridge killed in wars.