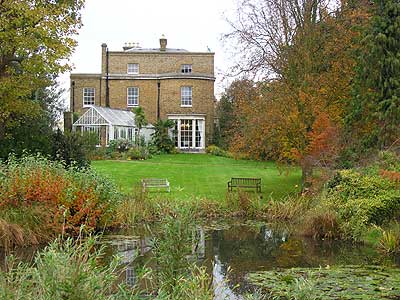 Tucked away in a corner of Enfield, North London, are a clutch of fascinating gardens: Capel Manor, Myddelton House and Forty Hall. I was fortunate enough to be invited to visit Myddelton House recently, where the gardens are undergoing a substantial renovation.

Myddelton House was the home for many years of the noted botanist and gardening writer and artist E.A. Bowles (1865-1954). The house itself was built in 1818 by Henry Carrington Bowles, a print- and map-maker from London, replacing Bowling Green House, an earlier Elizabethan house on the site. The new house was named Myddelton House in honour of Sir Hugh Myddelton, the engineer who created the New River in 1613 to supply London with fresh water. When E.A. Bowles created the current garden, he diverted water from the New River to feed ornamental features in the garden. 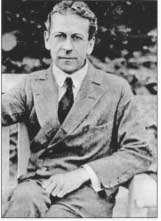 Edward Augustus Bowles, known to his intimates as 'Gussie'

Mr Bowles collected and grew many unusual and original plants, which can still be seen in the garden today. He had a particular fondness for bulbs and his interest in snowdrops and crocuses gave rise to his soubriquet 'The Crocus King'. Mr Bowles never married and kept the house just as it was in his childhood.

On his death, the house and gardens passed to the Royal Free Hospital School of Medicine and the London School of Pharmacy, who grew a range of medicinal plants there until 1967. Then it was purchased by the Lee Valley Regional Park Authority to be their headquarters; they added the kitchen garden site in 2002.

The New River itself was diverted around the gardens in 1959 but the abandoned channel was kept supplied by a payment from the Bowles family and the Royal Free Hospital. However, at the time the LVRPA bought the site, it was felt this cost could no longer be justified and the channel was filled in with rubble from the Victoria Line and laid to lawns. (Local football club Tottenham Hotspur gave 100 tonnes of top soil.) The cast-iron footbridge, dated 1832, survives by the boundary wall. 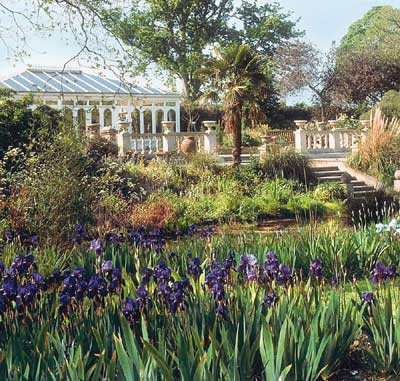 Although the LVPRA had been restoring Myddelton House and grounds in a low-key way since 1984, in 2007 it decided to ramp up the renovation of the gardens, in keeping with E.A. Bowles's original layout.

They were awarded an HLF grant of around £550k, to which the Authority is contributing matched funding, along with other smaller elements to bring, the total up to in excess of £700k. Work on the scheme started in April 2009 and estimated completion date is April 2011.

I was shown round by Andrew Turvey, the Head Gardener, and Paul Roper, on-site Project Manager. Among projects currently under way are the renovation of the potting shed and original cold frames, the rebuilding of the peach house, the modification of the stables to be a visitor/exhibition centre and the restoration of the Victorian kitchen garden.

Paul Roper commented that they are making good progress and have been able to meet many of the Authority's long-standing aspirations for the garden. Andrew Turvey did, however, point out that "HLF Funding does not cover half the projects needed to fully restored the garden." But they had obtained HLF funding to restore the kitchen garden.

Andrew himself joined the project in July last year, having previously been a horticultural advisor at the Royal Horticultural Society. Andrew said that he had been inspired to take up a career in gardening at 13, by watching The Lost Gardens of Heligan. Among his heroes were Tim Smit (who restored Heligan) and Peter Thoday and Harry Dodson, stars of the late 1980s' television series The Victorian Kitchen Garden and The Victorian Flower Garden.

Work is pressing ahead on the restoration of the gardens, terrace and pond beside the house, where a waterfall was created in the 1980s by Head Gardener Geoff Stebbings, using mains water from the house. The sundial, stolen in 2004 was restored in 2007 by Andrew Parker Bowles, who is a great-great-nephew of E. A. Bowles.

The Tulip Terrace overlooks the old kitchen garden, which is currently being restored. This is where Mr Bowles's father first allowed his son to make his earliest attempts at gardening and thereafter if it was planted with tulips and a tulip tea party was held annually.

Currently the beds here contain a range of the edible plants that will be planted in the completed kitchen garden. The plan is to sell plants and vegetables and to have a wholefood shop to offset some of the loss of income anticipated when the restoration is complete and the grounds will be opened free to the public.

In the years since the LVRPA took over, the rock pools and rock garden have largely silted up, with the filling in of the empty channel of the New River. After the original estate was divided up, the water flow varied depending on how other local water schemes affecting the river were managed.

The restoration of the rock garden was scheduled in the plan for five years' time but such is Andrew Turvey's enthusiasm that he started on the recovery of the garden and pools last October in his spare time. (The stream here flows into the local Turkey Brook.) Just recovering the pathways in this area took all winter but it does mean that work in this area is ahead of target and Paul Roper paid tribute to Andrew's dedication to his job. 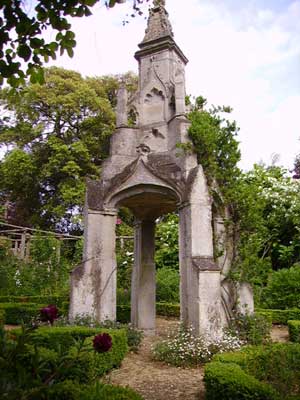 The gardens also contain a number of ornamental buildings and follies collected by Mr Bowles. These include Enfield Market Cross, which he rescued from a builder's yard, where it had been removed by the council in 1901 to be rendered into rubble, and which now stands in the centre of the Rose Garden. The York stone slabs in the neighbouring Pergola Garden, first rescued by Mr Bowles from the streets of Clerkenwell over 100 years ago, are currently being relaid.

Among the items found in the course of the restoration were some lead ostriches dating from the 1720s. These are being restored at a cost of £10,000. If anyone wants to order a replica for their own garden, please contact the Paul Roper or Andrew Turvey c/o Myddelton House.

Many of E. A. Bowles's original plants remain in the grounds, together with a range of plants named after him. There is a glorious wisteria floribunda, 'Macrobotrys' which flowers in May This was grown from a seed by Mr Bowles and planted in 1903. The pale lilac racemes can reach up to three inches in length. There is a handsome variegated form of Philadephus coronarius (mock orange) 'Bowles Variety' and the Bowles Mauve Erysimum (wallflower).

In August the Dicentra scandens ('Yellow Bleeding Heart Vine') comes into its own, dating back to Mr Bowles's ownership of the garden. In September visitors can admire the imposing Tetrapanax papyrifera (the Chinese Rice Paper Plant). Also worth looking out for when you visit are the botanical curiosities in Mr. Bowles's 'lunatic asylum' section of the garden and a national collection of irises, another of Mr. Bowles's favourites.

Andrew Turvey was keen to pay tribute to his team, which consists of two senior gardeners, two gardeners, a trainee, a part-time admin assistant and volunteers. At the time of my visit, there was further vacancy for a gardener. Andrew and Paul commented ruefully on their attrition rate to Kew and Wisley. The full complement of staff will be needed to manage the 6.5 acres, including the kitchen garden and the rock garden. Also playing a key role, they emphasised, are 200+ members of E.A. Bowles Myddelton House Society. E.A. Bowles's legacy is safe and well in their hands.

Thanks to Michelle Rosenberg, Andrew Turvey and Paul Roper for inviting me and showing me round the garden.

For further details, including a plan of the gardens, please go to www.leevalleypark.org.uk.