A Miscellany of Parks

I want to share several parks that are not easily fitted into one of the Trust's walks but are worth a visit if you are in the area.  It will also give you some clues as to how I find them, which should set you exploring.

A good one to start with is Boundary Gardens in Arnold Circus.  I discovered this from an article about the Trust in a newspaper.  I went and visited it.  It is a steep mound covered with shrubs with a shelter on the top.  It is built on the rubble of Old Nicol, a slum demolished and replaced by the LCC Boundary Estate 1895.  You can probably guess what else the article inspired me to do.

Maps are a good way to discover parks.  Valentines Park in Ilford was one of the first walks I organised for the Trust - even from a street map it was obviously interesting, so I asked Stephen Smith to show us around. 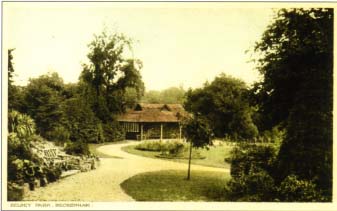 Kelsey Park, Beckenham, is another park obviously worth a visit .  It is the remnant of a much larger private garden.  All that is left is a series of lakes and waterfalls, created by damming The Beck, that runs for almost a kilometre.  The land either side of the lakes is packed with good planting and sports and play facilities.

Even the name of parks can be a clue to possible interest.  The Norman Leddy Memorial Park was certainly worth a ride on the bus to Hayes (Middlesex).  It is a small botanical garden that seems larger than it is because of the complex layout of the sections and the richness of the planting.  If you do visit this park, also visit the Town Hall Park, the grounds of a large house, the Churchyard and admire the quality planting by the Beck Theatre.

A couple of other memorial gardens are the Bernays Park in Stanmore, a memorial to a son lost in the First World War that retains the original design, and the Pedlars Acre in Kennington, which was part of the agreement for the foundation of St Mary at Lambeth the Museum of Garden History.  This park is well maintained by an independent trust.

An unusual clue to a garden worth visiting was the write-up in The Job (the Met Police house magazine) of Bellingham Green in an LCC estate where considerable effort had been made to turn an underused and unliked area into something for everyone - senior citizens, teenagers and under-fives.  The area is now what was originally intended - the focus of the estate.  Tower Garden in the earlier part of the Lordship Lane is a more traditional garden.

Another unusual clue was a call for tenders for the Crouch Hill Project, which I came across looking for science-based work for my employer.  There in Crouch Hill is a sports centre that has failed to flourish either under Council or private management, set in the remains of once-good planting on a complex sloping site.

The plan, I gather, is for housing, a school and a new park.  The site is next to the Parkland Walk that links Finsbury Park to Highgate.  I had walked this many times but had never gone up the steps to Crouch Hill.  The day I chose to visit was dull and turned to rain, but nevertheless there were several people in the park when I got there.

Sally Williams, the keeper of the inventory has recommended several parks to me; Barham Park in Perivale, where the walled gardens remain and are planted with formal flower beds and a Community Gardening Project at Roe Green are a couple worth passing on.  Joyce Bellamy of the Metropolitan Public Gardens Association showed me round the open spaces around Mitcham Common, after the Trust's visit to Morden Hall. 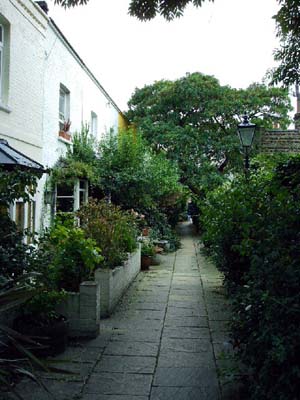 Walks by other organisations can introduce gardens.  Many of my Southwark mini-parks were first seen on Industrial Archaeology walks.  The 20th Century Society walk in Brixton passed some good gardens on the Loughborough Estate and visited a community garden in a Guinness Trust Estate.

The Peckham Society showed me 'The Gardens', a private square, off Peckham Rye.  The garden is a lawn surrounded by trees and bushes, but it is the architecture that is interesting.  The shed in the garden has a thick concrete roof which started as a shelter for a gun emplacement, and the amazing 'gothick' architecture of the houses that surround the square make it  worth a visit.  They also introduced me to Choumert Square (see photo), a shared front garden of a row of small houses that is crammed with plants; in summer it is a riot of colour.

Beyond maps and texts, recommendations and being led by others, finding gardens by chance is always fun.  Passing through Stratford on one of my long walks from Bromley-by-Bow to Wanstead, I saw signs to the Learning Garden, which I followed to find a garden designed for story-telling, some "tropical planting", seats and huts.  In the middle of the Ocean Estate, near Limehouse, I came across a large raised bed planted entirely with ornamental grasses, that was just right among the white concrete blocks.

The Trust's inventory contains many entries, but in addition to these are plenty of small areas of planting, streets where residents have planted flowers around the street trees, community gardens and areas of green space in redeveloped areas.  In many cases they are worth a bit of a journey or a slight detour and they are certainly wonderful to just chance upon.  Some also have their own history and story to tell.  If you find any you think are special, let me know: we might be able to fit them into a trust walk.