The planning application for the 2012 Olympic Games sites is causing uproar and upset at Manor Gardens allotments, Hackney Wick, E15. The allotments sit in the north section of the planned Olympic Park.

Olympic organisers claim the land is needed for a walkway to the stadia and a giant screen. The footpath would be used only for the four-week duration of the Games. 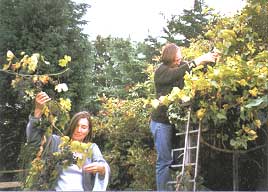 Allotment holders harvest grapes at Manor Gardens - but for how much longer?

The 100-year-old allotments were given to the community by Major Villiers, a director of Barings Bank, in 1906 for locals to use "in perpetuity". Today they are an important part of the close-knit local community, where residents have worked the soil and grown their "veg" for over 50 years.

Though provision has been made to move the allotments to a site on Marsh Lane fields, these plans are only temporary and could mean that the allotments will have to be moved again soon. Many of the allotment-holders are too frail to move, or fear their community will be destroyed by the disruption.

Not everyone agrees the proposed walkway is even necessary.David Mackay, lead architect for the Barcelona Olympics in 1992, worked on some of the original 2012 proposals. He has studied the plans and says the walkway is unnecessary. Not only is it peripheral to the site, but he told Daily Telegraph correspondent Lila Das Gupta in February, "The estimate for the number of people who will use it is way too high. I believe," he said," that these allotments could and should be saved. It would be easy to re- route the path to avoid them altogether".

This is not the view of the Mayor Ken Livingstone and his planners. At a recent public meeting he was asked why the allotments were being removed when there was a waiting list for them. He replied that losing the allotments was a tragedy, but, according to his advisors at the LDA, nothing can be done to save them. The Mayor said it was intended to make allotment provision on the Olympic Development site after 2012.

A campaign has been set up to protect the allotments. There is a web site (www.lifeisland.org) and a petition to the Prime Minister which can be signed electronically at http://petitions.pm.gov.uk/manorgardens/ or you can write to Sebastian Coe, London 2012, 1 Churchill Place, Canary Wharf, London E14 5NL.