The London Outer Orbital Path - more usually known as the London LOOP - is a 240 km (150 mile) signed walk along public footpaths, and through parks, woods and fields around the edge of Outer London, described as the M25 for walkers. The Loop is one of two footpaths that orbit London; the inner path is the Capital Ring.

The Loop was first proposed at a meeting between ramblers and the Countryside Commission in 1990. It was given an official launch at the House of Lords in 1993. The first section was opened on May 3, 1996, with a ceremony on Farthing Downs, Coulsdon. Other sections followed at the rate of two or three per year as signs were installed and leaflets for individual sections published, the route becoming fully walkable in 2001.

The Loop is a fascinating journey around the edge of Greater London down hidden alleyways, through residential areas, along rivers and canals, across public parks, nature reserves, woods, occasional enclaves of farmland and surprisingly few roads, with many unexpected gems along the way.

The Loop is divided into 15 stretches of about 10 miles, but there are usually ways of breaking it down into shorter sections. I did most of it over eight days in June and would like to share some of the gardens and open spaces I went through.

The Loop starts from the Kent bank of the River Thames at Erith. Riverside Garden is a formal area of planting. You cannot see the river from the Garden because of the flood defence wall. 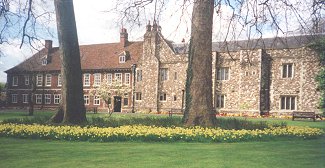 The path goes east along the Thames and then south along the River Darent on the very border of London. A little park on the River Cray in Crayford is soon followed by the larger open spaces of Hall Place and Foots Cray, which I covered in my article on Bexley, so all I will do is repeat my recommendation of these two parks.

Sidcup Place, an 18th century house with later additions, now a pub, has a well- planted formal garden in the old walled garden and some good bedding on the lawns near the house.

Paths through various woods then bring us to Petts Wood, an up-market garden suburb, that is worth a visit for its white-walled houses by various achitects.

The next formal landscape is High Elms near Farnborough. The country home of the Lubbock family, it burnt down and the grounds are now a country park. Much of the structure of the gardens is still visible. A series of terraces climb up the hill giving a good view of other areas of the garden.

Keston Common is the source of the Ravensbourne. The spring has a brick surround and feeds a series of ponds before setting off to Deptford.

The Coulsdon Commons, areas bought up by the Corporation of London in the late 19th Century, are major features of the Loop as it passes south of Croydon. Although not gardens, I am including them because several are chalk grassl and that are such a profusion of colour in the early summer that they are worth a visit. 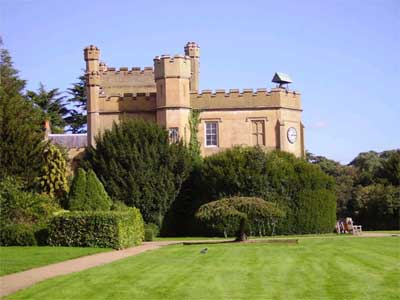 Oaks Park, near Banstead, has some formal gardens near the entrance and amongst the remnants of the walled gardens, but is mainly trees. Just south of the park, over the busy road is a field of lavender grown for biodiversity but once a typical crop of south London.

The route passes through Nonsuch Park, only the foundations of the banqueting house remains. The new buildings in a version of gothic are quite good.

The great gate with the larger than life greyhound of Bourne Hall, Ewell, is the entrance to a small, well planted park with a new spaceship-like museum. The loop then follows the Hogsmill.

The Loop crosses the Thames at Kingston and enters Bushy Park passing through some of the fenced gardens with small ponds and masses of rhododendrons. Then Crane Park is a riverside walk which includes some relicts of the gunpowder industry and a nature reserve.

Crossing Hounslow Heath, still a wild place - although these days one is warned of adders rather than highwaymen - we rejoin the Crane as it approaches Cranford. The Loop follows the Grand Union Canal until it breaks north past the Stockley Business Park. This is a fine example of this type of development: glass and steel offices, elegant water features and dramatic sculptures. It is a while till the next garden, but the Loop passes Grimsdyke, WS Gilbert House, and then crosses the remains of the gardens of Bentley Priory, an important picturesque landscape. Scratchwood and Moat Mount aside the A1 are the remains of a great hunting estate. Scratchwood has the swaths of trees that pheasants thrive in, and Moat Mount the remains of a more formal landscape with a pond and walks. 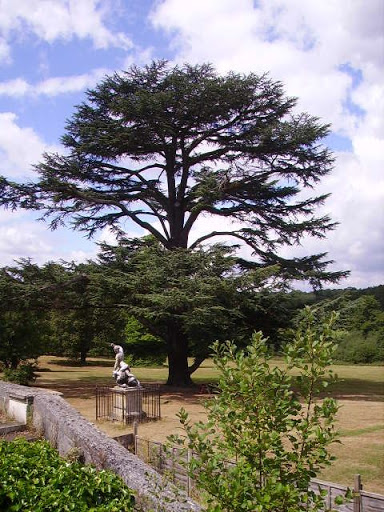 The Loop now follows the Dollis Brook, which becomes more managed as one approaches Barnet and ends as a metalled walk. Through Hadley Wood to Trent Park where Sassoon enriched the landscape with second-hand statues.

From the other side of Enfield, the Loop skirts Gunpowder Park where mown paths and, in some cases, metalled paths pass through a mixture of farmland and rough ground.

Epping Forest is another landscape saved by the Corporation of London. I think it is worth an article for itself.

Hainault Forest Country park has plenty of laid-out walks, an interpretation centre and a rare breeds centre: a good place for a family day out. Havering Country park is the overgrown ground of a lost house. But the Loop passes through the avenue of Wellingtonias, which still stand proud. I was pleased to see that the gaps are being replanted.

The last part of the Loop follows the Ingelsbourne, with varying ease and under various names more or less to Rainham. Rainham House (National Trust) is well worth a visit: you get to see the ground floor and part of the garden which retains some original features.

Beyond Rainham the Loop threads its way through an industrial estate to come out on Rainham Marsh, where you can look across the Thames to Erith where we started.

The Loop is a more serious enterprise than the Capital Ring. Some parts are overgrown and the route is not always easily followed or good underfoot; but you do pass through some good parks and gardens that are worth a visit. The Loop is reasonably well signed, and there are leaflets and a book by David Sharp (published by Aurum Press in 2001).