On the Move in Lewisham 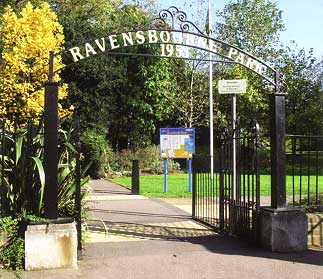 The ironwork above the gate says 'Ravensbourne Park', but the board says 'Brookmill Park'.

Last autumn I led a Trust Walk that was to be an introduction to the parks of Lewisham. My original idea was to take a route from Chris Downharn's 30 Great Runs in London and do it as a walk. In the end, we followed the Ravensbourne from Deptford Bridge to Catford Bridge so I will now take you on Chris's route from Catford.

Almost immediately we get distracted from his route by taking in Ravensbourne Park Gardens, originally the private park to the estate. There is a circular path linking the two gates - I will leave you to choose your route.

Continuing uphill, you come to Blythe Hill Fields, with excellent views of London. Both Centre Point in the West End and the City and Docklands are visible. Note the large red building in a park to the north: we will be there in a while. Descend towards the bottom corner by a group of stag-headed trees.

We now head north through roads with a variety of house styles and ages to a location called Crofton Park. Past the station we come to the wall of Brockley Cemetery. Adjacent to this is Ladywell Cemetery. They were built around the same time (1858) and, wisely, the two cemeteries used the same architects, Tinker and Morphew. Now managed as a single entity, they are somewhat overgrown. Chris's run takes you from the Brockley gate to the Ladywell Gate, both on Ivy Road. However I managed to go round in a circle and ended up back at the Brockley gate but made it to the Ladywell gate the second time. Actually it is worth a wander as there are some good graves; but - alas - only one chapel has survived the war.

A short backtrack down Ivy Road and a path take you to Hilly Fields. This is the park seen from Blythe Hill. The red building is Prendergast's School, opened in 1880 as the West Kent Grammar School. The park was opened in 1896 following a public campaign for a park. The layout is by Sexby, who is also responsible for several other early LCC parks. There is a wide range of play facilities in the park including a table-tennis table, and a do-it-yourself sundial - you stand on a marked stone slab and act as the gnomon.

We now head east to Vicars Hill and go down to Ladywell station and into Ladywell Fields Park, which was included in my walk. This begins a long stretch of open areas that follow the Ravensbourne. Once more we can divert from the running route to go into the churchyard of St Mary. Parts of the current building date to the late 15th century, but there has been much rebuilding. It still has a country church feel to it.

Back in the park, as part of the recent - and ongoing - work, some overflow channels to the Ravensbourne have been developed. These act as wildlife habitat but also as flood detention. (Regular readers of my walks will recall having followed the Ravensbourne and its tributaries in several walks.) There are plenty of sports facilities, including a running track. In the middle of the park you cross the river and the railway by a series of bridges. This area is described as the hub and is due for refurbishment.

We then go under the railway line from Catford Station. The last area of Ladywell Fields rises towards Blythe Fields but our walk ends at Catford Bridge Station. I am not sure how long this route takes to run but it took me about two hours to walk it.