LPGT's Walks Specialist JOHN GOODIER returns to Harrow to revisit the parks he knew as a child.

I lived in the London Borough of Harrow, except for some years as a student, for about 30 years. First at Edgware in a 'homes for heroes' estate built in garden suburbs style; later at Headstone, in a conversion maisonette, overlooking a park, one of the many Metroland houses that covered the area in the 30s.

I have been back occasionally since moving to Shepherds Bush. Over Easter last year I went back specifically to look at the parks in the parts of the borough I had lived.

Since I left, Harrow has gained a modern shopping centre with malls and pedestrianised areas. There is some tropical planting by the ramps to one of the central car parks and lots of big bright planters in the streets.

Harrow Church and School seen from near the Cricket Grounds, 1816

Leaving Harrow-on-the-Hill station by the southern exit, the scene has hardly changed. Grove Open Space sweeps up the side of Harrow Hill. A walk up to the top corner leads to Church Path, which brings you to St Mary's Church with its spectacular view, supposedly as far as Winchester; but I have not been convinced of that. The church, dating from the twelfth century, although much rebuilt in the fourteenth and fifteenth centuries, sits in a pretty churchyard.

The way from the station to my local park, Harrow Recreation Ground, is now via an underpass, which has recently been decorated with cut-tile mosaics designed by local schoolchildren. I entered the park by the main ornamental gates, which I had probably not done before. It was unchanged from when I lived backing onto to it. As is typical of parks in suburban areas, it is given over to sports: bowls, cricket, football, tennis courts - both hard and grass - and even the crazy golf course is still there. It has recently gained a sensory garden designed in association with a charity for the blind. The park is bordered by mature trees and shrubs.

A half-mile or so north, Headstone Manor is another recreation ground turned over mainly to sport but is well worth visiting for the moated manor house. Originally 14th century, it is currently undergoing restoration, and the two barns housing Harrow Museum and a granary recently moved to the site.

West to Pinner and Pinner Memorial Park has good flowery planting and a large duck pond. Pinner Village Park has some fine pine trees. Loudon's parents are buried in Pinner Church Yard and Pinner still has a country village air to it.

The Yeading Brook can be followed through a series of open spaces, including Roxbourne Park, and on into Hillingdon.

Now I want to take you to the other side of Harrow at Stanmore. Centenary Park in Culver Grove was opened in the 1930s and named for the centenary of local government. It has the remains of a formal layout which seems to have related to the school next to the park but later building has broken this effect. It also has a nine-hole golf course.

Chandos Recreation Ground, across Honeypot Lane, was where we went, as children, to cycle or roller-skate down the hill, or play on the swings. The swings are now at the top of the hill. It all seems less cared for, but the most noticeable difference is how few people are in the park, even on a weekend afternoon.

Stonegrove Park, just over the border in Barnet also seems less loved and used and the boating pond has become a flower bed. 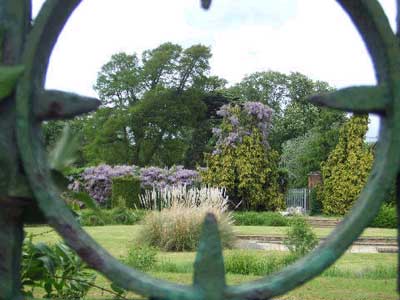 The Walled Garden at Canons Park

Canons Park was special, and I am very pleased that the Walled Garden has been restored: it will take a while for the planting to be as I remember it. The improvement to the paths is very welcome, as it is very muddy in wet weather. As a child, I particularly liked the spinney, a strip of woodland that is good for hide-and-chase games. In spring it is a mass of bluebells and wild garlic.

Even as a child, I knew the importance of Canons Park, with its avenues of trees, one of which formed Canons Drive, with the duck pond and the two hidden gardens of Orchard Close and Rosegarden Close. Neither of these is as well looked after as when I was a child, but the duck pond is well managed. As I child I got on to Seven Acre Lake with some friends who lived in Lake View, and there is a picture of my father, as a boy, punting an old door on the Lake! That would not be allowed now, nor would paddling in the Edgware Brook and the Silk Stream.

There is a small public recreation ground in Dalkeith Road, where a glimpse of the Lake is possible. The recreation ground is now heavily wooded but I remember sitting on some steps in formal bedding while my sister took one of her Brownie Badges in a house nearby. The Duke of Chandos, who laid out Canons Park, also rebuilt St Lawrence's Church. Now restored, it is well worth a visit. It is still a thriving parish, but the Duke's mausoleum is in the care of the Churches Conservation Trust, who have restored it. 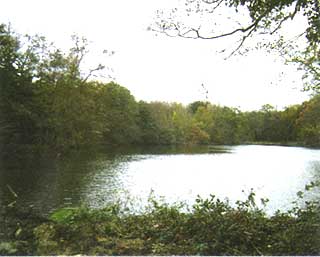 After my visit to Canons Park in May this year to see the restored garden, I went to see what had become of RAF Stanmore, which I had seen previously being covered with housing. I was very pleased that the lake, all that remains of the gardens of Stanmore House, is surrounded by grass and trees and open to the public. So as well as telling you of some of the parks I used to know and use, I can tell you of a new park.

One of the great joys and assets of Harrow is that, in the north of the borough, Stanmore and Harrow Weald Commons form large areas of wooded land. Between them lies Bentley Priory, with the remains of a picturesque garden. Some land that was still farmed when I was a child has been made into Stanmore Country Park.

So a mixed story of improvement in some areas and a bit of a decline in others. I miss the wooded commons and the open streams and many ponds. I doubt I would ever move back but I still find it worth a visit and I recommend Harrow and its parks to you.