Gunnersbury Park, like so many local authority-owned parks, has suffered badly in recent years, as pressure on council budgets diverts funds away from park maintenance.  Currently the park is jointly administered by Ealing and Hounslow Councils, but lack of maintenance has caused the fabric and buildings in the park to deteriorate. Recently the Friends described the condition of the listed buildings as "appalling".

A report commissioned from Arup Research to review the potential of the two mansions in the park suggested that consideration be given to converting them into a hotel or residential units. 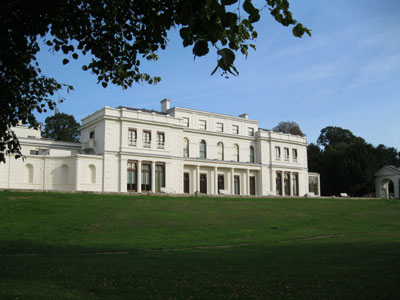 A second study, by the Parks Agency, highlighted the lack of investment and estimated that, in order to restore the estate, the two councils would have to contribute £2.75m in partnership funding to obtain grant support from bodies like the Heritage Lottery Fund.

Both reports show that the current arrangements - the shared ownership, joint management and low priority given to the park by both councils, has led to a "strategic malaise", responsible for the current poor quality of the grounds and buildings maintenance.

At a meeting called to discuss the future of the park at the end of 2005, there was broad agreement that current arrangements for the Park's management could not continue and that the Friends should support and be involved in the development of proposals for the future.

The Friends and the Parks Agency's preferred choice is to re-launch Gunnersbury Park as a social enterprise and pass over the management and/or ownership to an independent trust like that recently established for Chiswick House and grounds.

Now the LB Hounslow has commissioned Chris Blandford Associates to prepare a Conservation Statement which "draws together what is known about the estate in historical and ecological terms as well as key issues and vulnerabilities that impact on the park's fabric and activities".

The statement is intended to "help in shaping an application to the Heritage Lottery Fund for a Project Planning Grant in 2006, which would enable the managers of the Gunnersbury Park Estate to undertake a full Conservation Management Plan and other documentation to support a grant application to the Heritage Lottery Fund, most probably under its Heritage Grants Scheme".  In addition the Statement is a "short comprehensive document for the park's managers from which the Conservation Management plan will emerge".  (Quotes from Introduction to the draft Statement).

James Wisdom, Chairman of the Friends, said, "The Friends have been struggling for nearly 25 years to find a future for Gunnersbury.  It is clear we cannot continue with the current arrangements.  We will work now to ensure that any new organisation for the management of the Park and the Museum are successful".