JOHN GOODIER boots up to follow the Centenary Trail

Epping Forest runs down the eastern edge of London. It starts north of Epping and ends at Wanstead. The top half is in Essex but, as Epping can be reached by London Underground and it is owned and managed by the Corporation of London, it counts as a London Open Space.

Epping Forest is all that remains of the royal forest of Waltham. It is about one tenth of the area recorded in 1641. Loss of the forest to farming and later to housing could have led to its almost complete loss in the 19th century. There would have been only small patches kept as parks and greens in housing development.

Luckily one of the encroachments was the City of London Cemetery, and this gave the Corporation Commoners rights in the forest and so they were able to save it under the Eloping Forest Act 1878. This gave the public access to the forest in a way that had never occurred before. 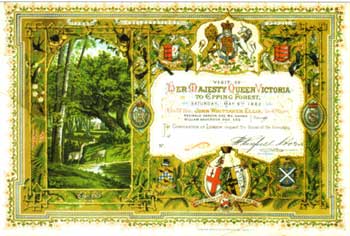 Illuminated certificate of invitation to the opening of Epping Forest by Queen Victoria, Saturday 6th May, 1882
(Hazelle Jackson collection)

The forest was opened on Saturday 6th May 1882 by Queen Victoria. Since then the Corporation has brought some land back into the forest and bought other land that remains as farming and provides a rural buffer around the forest and so protects the wildlife. As it is today the forest is two thirds woodland and one third open grazing and water.

My way of exploring Epping is to follow the Centenary Trail, which starts at Epping Station. After a hesitant start across a grassy meadow, some roadside verge and across the M25, the path enters the most magnificent old managed forest. Coppice stools some thousand or so years old cover the ground. Further on the tree form is the coppard, where a coppice has not been cut but the stems have been allowed to grow to tree size and then pollarded, which opens the forest to grazing.

Coppicing and pollarding have been reintroduced. The coppicing is fairly easy but some species do not respond well to renewed pollarding. The Corporation have been careful in proceeding and have published the results of their work; so those who cannot risk losing the odd tree, because they have fewer, can benefit from the Corporation's experience when they try to re-establish tree management.

The path in this part of the forest is easily followed and passes Ambresbury Banks, one of two iron age enclosures in the forest. About half way along the walk, one comes to the Visitor Centre with a pub. This is a popular place, especially in the summer. There are level tracks for wheelchair users in the area. 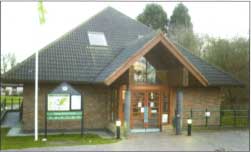 Epping Forest Visitor Centre at High Beech in the heart of the Forest
(Photo: Ned Paul)

The wood here becomes more mixed and much of it is regrowth. There are several areas of open space, culminating in Chingford Plain, used for an annual fair, and one of the few open spaces were model aircraft can be flown. At the edge of this is Queen Elizabeth's Hunting Lodge, which originally was a place to view the hunt. It has been a house, a tea room and a museum. It is now restored to what is practical: that is the viewing platforms are glazed. There are displays of Tudor food, Tudor building technique and occasional exhibitions.

For the next few miles the forest is at its narrowest as it passes through Highams Park, a former Repton landscape with an upmarket 1930s housing estate overlooking the lake. More scrubby grassland brings you to Wanstead Flats, a major area of sports fields.

This walk gives a full range of the landscapes of the Forest. Other areas worth a visit are Lord Bushes and Knighton Wood. Detached from the main forest, these were the sites of private houses and remnants, mainly the lakes, some paths and the tree species, can be explored.

Parts of the Lower forest north of Epping and the green at Theydon Bois are well-kept public open space.

One of the ponds in Epping Forest

The Eagle at Snaresbrook is a large formal pond and there are many less formal ponds ranging from natural lakes to gravel diggings and V2 craters.

Wanstead Park with the remnants of a complex and symbolic landscape, much of which was designed by Repton, is part of the Forest. Copthall lies in the buffer-land. The gardens here are being restored to at least a reflection of their Victorian splendour.

The City of London Cemetery is worth a visit. There are two crematoria, one of striking modern design, chapels, and lots of interesting graves.

The forest is crossed by several roads and there are car parks at many points, which allow easy access to the forest. Some areas can be crowded but wandering off the main paths, by design or poor map reading (I have done both), can soon get you into quiet parts. Even so, you are never far from the actions of other people, be it the old managed trees or the fact the path you are following was created by mountain bikers (they cross small streams in muddy patches - paddling is the only way on).

Much to See and Do

There is much to see in Epping and lots to do from walking to sitting on grass to flying model planes and fishing. It is best to take a map and there are several circular walks covered by leaflets and books available from the visitor centre. I find a compass useful just to check directions. But, if you do get lost, you can soon get on to a road and find a bus.

Visit Epping Forest Friends' website for details of walks in the Forest in 2007 http://www.members.aol.com/friendsef/foef.htm (in new window)