A Sense of the Special

THE views from the north-east corner of Duppas Hill show how special Croydon is. In the sixties, when Canary Wharf was still successfully importing fruit, Croydon decided to build upwards and created a mini-Manhattan.

Opened in 1863, Duppas Hill is Croydon's oldest park. It is now mainly used for organised sports, although in the past it had a bandstand.

The view from Park Hill is not as clear because Park Hill is well planted with mature trees. It was once part of the hunting ground of the Archbishop of Canterbury. The Hornimans lived in the house at the top of the park, and the conservatory has been re-erected at the Horniman Museum. There is a walled garden displaying a collection of medicinal plants. Within the park is a water tower of 1867; part of another aspect of Croydon being special, in that it was a pioneer in many utilities.

Another utility is railways, and, although Croydon had a canal and later a tramway (and now has a new tram system), it ended with railway stations on the edge of the town. An attempt was made between 1868 and 1871 to operate a Central station but it was not a success, and the land was used in a redevelopment of the town centre in the 1880s. The station was made into a park and in 1983 the park was remodelled and named The Queen's Gardens and opened by Her Majesty. The lower part retains the Victorian look but the newer part at street level has a fine water feature.

Croydon's main industry now is corporate administration but for most of its history its industries have been based on the River Wandle. In 1890 two fields either side of the Wandle were made into a park, with a large boating lake and all the splendour of a park of that era. Changes in drainage reduced the flow of the Wandle and led to the lake drying up. Wandle Park is now mainly given over to informal sport, but a few willows still mark the site of the now culverted river. 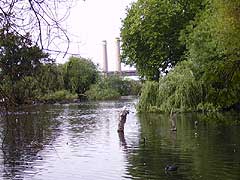 The Wandle first becomes visible at Waddon Ponds, which were made into a park in 1928 when the mill they served closed. The pond occupies most of the park and is home to many coots and Canada geese, whose grazing has reduced much of the grass to masses of daisies. There are also flower beds and trees.

Another park dating from between the wars is Haling Grove. Once the grounds of a private house, since demolished, it has good planting over much of its area with a playing field hidden by a loose hedge.

Fairfield Park is between Fairfield Hall and the college. Laid out in the 60s in a formal grid pattern of walks and lawns, it is also part of the ill-fated Central station line having been the sidings. When the railway was abandoned the site was used for gravel pits. A car park occupies the void and the park is on the roof of the car park. It is a good example of a sixties park. Parks of this era are going out of fashion but I hope Croydon keeps the Fairfield Park - it is a fitting part of the landscape of 20th and 21st century Croydon.

Beyond the town, in the west is Beddington Park (LB Sutton) and the Wandle trail to Wandsworth, and to the east are the more natural landscapes of Lloyd Park and the Addington Hills.

Add the good sponsored planting of roundabouts, and the planting in the shopping malls and precincts, and one can say that Croydon is special for its parks and open spaces, as well as its architecture and industrial history.