Who to Cremorne would not Gladly Repair?

Back in the mid-19th century, Cremorne Gardens were one of London's most popular pleasure grounds, a mecca for Londoners of all classes, up for a day's outing or a night on the town. Today's Cremorne Gardens are a tiny park, tucked away on the edge of the Thames, in a corner of the original site, just west of Battersea Bridge, under the looming shadow of the former Lots Road power station. Only the ornate wrought iron gates to the pleasure grounds, re-located here, offer a faint echo of the area's colourful past.

Who's for Cremorne? For the
Steamers are going
From London the fare is but
Threepence a nob.

William Thomas Thomas
The Chelsea Steamers!
Or, a Trip to Cremorne.
A Song.

In the early 1800s the grounds of Viscount Cremorne's London house, originally known as Chelsea Farm, extended north from the river Thames at Chelsea up to the King's Road. The estate was famous for its elegant gardens, laid out by Nathaniel Richmond. After Lord Cremorne died in 1813, the house passed to Lady Cremorne, his second wife, who was the grand-daughter of William Penn, who founded Pennsylvania. There were no male heirs and after her death it was inherited by her nephew Grenville Penn, who sold it in 1831 to Charles Random, the self-styled Baron de Bérenger. Random established a 'National Sporting Club', called the Stadium, in the grounds for 'the cultivation of skilful and manly exercise' which included shooting, sailing, bathing, archery and fencing. (The name lives on in Stadium Street.) The venture failed and he was forced to surrender the property to his creditors.

In 1845 the site was acquired by Thomas Bartlett Simpson, owner of the North & South American Coffee House in Threadneedle Street. Simpson sublet to James Ellis, a confectioner, who re-opened the house and grounds as Cremorne Gardens, laid out as typical London pleasure gardens of the era, with a range of attractions including concerts, restaurants, fireworks, balloon ascents, dancing and walks in the cultivated grounds.

After Ellis went bankrupt in 1850, Simpson took over the management himself and within a few years Cremorne Gardens was established as a popular feature of London's summer season, appealing to the increasing number of people with leisure looking for reasonably priced entertainment. The Gardens could be easily reached by cab or bus from Charing Cross to the Grand Entrance in King's Road or on sunny summer evenings by the threepenny steamer from the City to Cremorne Pier, where they disembarked by the river gate at the south-east corner of the gardens. 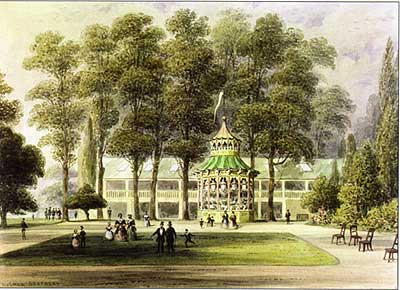 Cremorne Gardens in 1852, depicted in a watercolour by TH Shepherd
(Royal Borough of Kensington & Chelsea archive)

Once inside, the visitors found extensive, well laid out grounds, cultivated by 15 gardeners. There was a wide range of amusements on offer, including a Crystal Grotto, a Marionette Theatre, a Hermit's Cave, an American Bowling Saloon, a circus, a theatre and a weekly fireworks display For the energetic there was an orchestra, a dancing platform and there were ample dining facilities.

The regular attractions were supplemented by special events like the Naval Fête in 1851 whose highlight was a mock battle featuring the blowing up of a retired steamer to the cheers of the spectators.

In 1850s the adjoining Ashburnham House was added. Here the management staged flower shows and exhibitions and displays of ballooning. Montgolfier performed here and in 1839 a Mr Hampton, ascended to a height of about two miles with a balloon and parachute, and descended safely, by no means guaranteed at the time. Later in 1874 a Belgian, Vincent de Groof, jumped from his flying machine at 500 feet, when it was tethered to a runaway balloon, and with only silk wings to support him. He was killed landing in Sidney Street. The Balloon Tavern was opened in the gardens in 1862.

While the conduct of the daytime visitors was relatively decorous, the Gardens at night attracted a drunk and rowdy element. By the late 1850s local residents had begun a series of campaigns and petitions to the local Vestry against the renewal of its licence.

Simpson retired in 1861 and was replaced by the most successful of the Gardens' managers, Edward Tyrrell Smith, a serial "impresario" whose previous ventures had included a themed tavern in Holborn and the management of several London theatres, including Drury Lane, Her Majesty's, and the Lyceum. He also founded the Alhambra in Leicester Square, turned Crockford's gaming- house into the Wellington Restaurant, became proprietor of the Sunday Times, and finally settled down in the metal trade.

Smith gave up the lease in 1867 and from 1867 to 1870 the sublessee was William Watling. The balloon ascents continued: in 1869, a monster balloon, nearly 100 feet in diameter, appropriately called The Captive, was secured by a rope about 2,000 feet long, which was let out and wound in by steam power and made daily ascents. The Captive balloon, however, one day escaped from its moorings, and the exhibition was discontinued.

In 1870 John Baum took over He spent more than £10,000 on the Gardens and premises, and made a number of improvements, including a new theatre and staging ballets; but the Gardens continued to attract a disreputable night-time crowd.

A contemporary account of 1870 records: "The Gardens are covered with trees, and ornamented with fountains, flower-beds, and statues. This is the maddest place in London after ten o'clock in the evening. Until that hour, the middle class of London citizens, shop-keepers, tradesmen, and clerks, and their wives and sweethearts have possession of the Gardens; but at that hour they leave the place, and from thence until one and two o'clock in the morning, Cremorne is in the possession of Lost Women and their male friends and abettors.

"At Cremorne there is a circular platform on which a band of music is constantly stationed during the evening, and here the dancing is principally done. Between the dances the girls promenade, or take supper with their male friends in the numerous restaurants, which are always crowded to excess by noisy people of both sexes, drinking Champagne and Moselle, or eating lobsters or devilled kidneys. Cold suppers are provided for the girls in an upper saloon, for which they are charged two shillings and sixpence a piece, without wine.

"Then there are fireworks, two or three theatres and music halls, Japanese jugglers, bowling alleys, shooting galleries, and other modes of diversion and amusement."

By the late 1870s the "lost women and their abettors" were generating a steady procession of drunk and disorderly cases in front of the Westminster magistrates. Nor were the rowdies confined to the Gardens. A strip of waste ground between Ashburnham House and the river, called "the Lots", was "a bone of contention" for many years between residents and the Chelsea Vestry, due to the behaviour of a large number of "roughs" in the habit of meeting there.

Towards the end of 1876 an anonymous pamphlet was circulated locally, criticising the gardens in virulent terms as a "nursery of every kind of vice". Its author was revealed to be a Chelsea tailor, Alfred Brandon. Mr. Baum sued for libel but won only notional damages and by now was ill and in serious debt. In 1877 he withdrew his application for a renewed licence and the gardens closed. Simpson's window Jane (Simpson had died in 1872) lost no time in continuing the local housing redevelopment her husband had already begun locally. 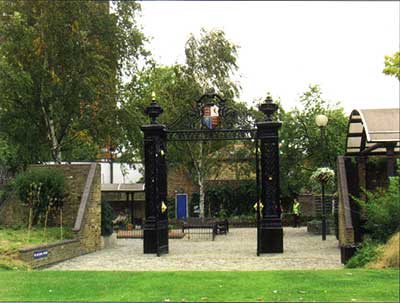 Following the closure of the Gardens, the ornamental iron gates which used to be at the King's Road entrance were moved to the Watney brewery in nearby Tetcott Road.

By the time of WW2, the western end of Chelsea, known as World's End, was one of the most run-down areas in the borough and it was often bombed during the Blitz. In the 1960s Chelsea Borough Council began to tackle the issue by erecting new social housing, in particular the Cremorne Estate. This was followed in the 1980s by the World's End Estate, which swept away many of the dilapidated terraces and provided much-needed community facilities. The huge development of six tower blocks included a shopping centre, a school, a church and a community centre designed by Eric Lyons and associates in 1977.

The modern Cremorne Gardens were opened in 1982 on a small area of open space by the Thames near Lots Road power station to provide a recreation area for local residents. They are sited on the riverside with jetties onto the Thames.

The gates from the old Gardens were returned from Watney's brewery, and reinstated in the new Cremorne Gardens, as a reminder of their predecessor.