THE air raids of the night of 20th February 1944 were particularly devastating to the Gunter Estate in West Kensington.

In 1948, in recognition of the loss of life, the Gunter Estate gave Fulham Council an area of land that had been tennis courts for the estate to be laid out as a memorial to those who had died that night, and in other air raids.

The area was laid out as a small park, of just under an acre, by the council, and was funded by Mr R G Gunter. It was opened in July 1948 as Gwendwr Garden, commemorating in addition the Welsh home of the Gunter family. 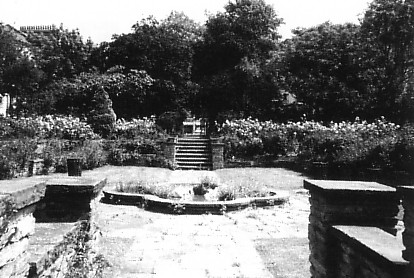 Gwendwr Garden, seen here in 1997, was created in memory of air-raid victims of 1944

The park is very full of detail, having a sunken area with formal pond, an area of lawn with specimen trees and some shrub planting. Alas the statue, Meditation by Cawthra, has gone, but the commemorative plaque remains and Gwendwr Garden forms a quiet oasis between the North End Road and the Talgarth Road.

Some of the bombed houses to the south were not rebuilt as most of their site became part of the widened Talgarth Road.

In the mid-90s an Architectural Foundation exercise was carried out in Hammersmith and Fulham, in which speculative proposals were made to improve the open spaces and streetscape of the Borough.

The proposals for Gwendwr Garden were among the more controversial. There was a feeling that the park should not be altered as that would lose the details of the original donation and plans to include the remaining land from the bombed houses in an enlarged formal park upset the dog walkers who use that area.

There are other civilian memorials in London. Some, like the Thames Barrier Park and Barkentine Park on Westway Road on the Isle of Dogs, are new and well looked after with the memoriality made clear.

Others like Belair, set up as a memorial country club in rural Camberwell by Southwark, have lost their history; there is no mention of the war memorial on the 'Historic Southwark" plaque on the gatehouse, although the history of the house is told.

The memorial garden in Cuckoo Hill Park, Hanwell, appears to have been a community effort from the sixties which has been forgotten, or at least neglected.

These memorials are part of the history of the place. The loss of these connections reduces both the significance and the appreciation of the park.

THE 1960s model of the docks at the Science Museum shows a small park in Wapping, set back from the river. It is not part of the Thames Path, nor of the new landscape, and was unknown to me before I had spotted it on the model.

Wapping Recreation Ground lies between Green Street and Tench Street and was opened in the 1890s as part of a slum clearance scheme. The layout of paths is as shown on the model, and is probably mainly the original layout. Some modern play equipment and some 70s-look boulders have been added. Some of the trees may be originals, in which case they are lucky survivors as the area was bombed.

Of the nearby St Peter's church, of 1756, only the tower and bits of the walls of the nave were left. It has now been rebuilt as houses, and the school next door, with the statues of a boy and a girl over their appropriate entrances, has been converted to housing. In 1951 the churchyard was made into a park, the only part of the proposed East London Park that was ever laid out. It is opposite the west front of the church surrounded on two sides by the enclosing dock wall.

The original entrance lock to the London Docks, Wapping Pierhead, is now a private garden to the houses occupying the fine Georgian buildings that were once the dock offices. On the other side of the road is a modern hard landscape. There is an area of shrubs seats and grass between the River Police Station and their modern boat maintenance building. Opposite is a grassed area with trees that run up to join the open spaces between the robust LCC blocks of flats.

As well as the number and variety of open spaces to be found in the area, it is one of the least visually altered parts of Docklands. Although now converted into housing most of the warehouses remain and the road is still surfaced in stone sets.

It is no surprise that the area was designated Wapping Pierhead Conservation Area in January 1979. There are no less than 20 buildings listed Grade II in the area, and it is well worth visiting.

I enjoyed John Goodier's piece on Wapping Recreation Ground in your last issue and wondered if you knew about the illustration of this site dating from 1891.

I included it in my book, People's Parks, on p221 and this illustration came from J.J. Sexiby's The Municipal Parks and Gardens of London.