MICHAEL ANN MULLEN finds out about a quiet corner of Islington

The green tranquillity of Compton Terrace Gardens stretches nearly seventy metres along Upper Street, just south of Highbury Corner - a haven to walk through or sit in for both residents and passers-by. 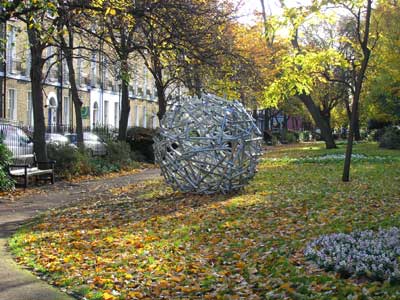 Only nineteen metres at the widest (about sixty feet), the gardens separate the busy high street from the Union Chapel and Georgian terraces that flank it. An access road divides it into two unequal sections. Trees and shrubs line both sides of the gardens and a lawn runs down the middle with two anchor-shaped flowerbeds cut into the southern section.

The gardens were created in 1823 by an agreement between the landowner, the Marquis of Northampton, and the lessees of the houses being built on it. They gained the right to build a private road in front of the houses with ‘a paddock or grassplot as a pleasure-ground enclosed by a dwarf wall and iron fence.’ The agreement specified that clothes drying was not allowed nor the storage of ‘timber, stone, bricks, lime or any other material whatsoever’.

Fifty years later, the first edition Ordnance Survey Map (surveyed 1871; published 1877) shows it laid out in the Victorian manner with six flowerbeds cut into the grass in each section, and trees lining the Upper Street side. Planting visible in a 1910 photo indicates it had changed little during the intervening years.

Today the gardens are smaller than they were originally, their symmetry destroyed by a German V1 bomb that fell on the north end of the terrace in June 1944, destroying 12 of the 19 houses and the gardens in front of them. Highbury Corner roundabout occupies this area today.

Islington Council manages the gardens and, until the 1980s, a dedicated professional looked after them. By the early 2000s, many of the shrubs were overgrown and the tree cover had become unacceptably dense. The Upper Street Association, which includes residents of Compton Terrace, successfully petitioned Islington Council to renew some of the planting in 2008. Subsequently, the Association's gardens committee raised funds to plant fruit trees, shrubs and a herb garden in the sunny north section.

Based in a neglected park keeper's hut, they are now renewing planting in the shadier, south section. Working in co-operation with Islington Council, they aim to make Compton Terrace Gardens a beautiful and well cared for public garden appropriate to the needs and tastes of the 21st century.