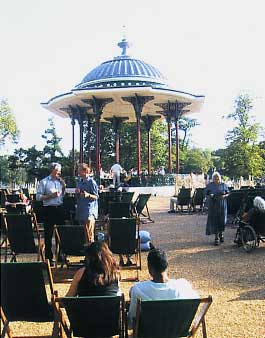 Deckchairs around the bandstand. the traditional scene of parkgoers listening to music has been made possible again at Clapham Common thanks to major restoration in 2006.

In 1889, Clapham residents petitioned the London County Council for a bandstand. This was built a year later at a cost of £600, The Bandstand was a copy of the two erected in 1861 in the Royal Horticultural Society's gardens in South Kensington. It proved a great attraction with concerts on Wednesday afternoons and on Sundays.

It was in regular use until well after WWII, but during the 1960s it gradually fell out of use. Apart from a lick of paint, no serious maintenance was undertaken. By the turn of the century, it had deteriorated seriously. The base was graffiti-ridden and crumbling, the columns were rusted, pigeons nested in the rotting cupola, the finial had gone and the damaged tarmac surround pooled rainwater.

Faced with its likely collapse, in the summer of 2003 the Friends of Clapham Common and the Clapham Society persuaded the owners, Lambeth Council, to participate in a major fundraising and restoration project. Dannatt Johnson, Architects led a team to prepare a plan for a Heritage Lottery Fund bid. This brought in £0.9m, supported by a contribution of £300,000 from Lambeth and by over £100,000 raised from the local community.

Challenges included replacing the wooden frame for the cupola, clearing out the blocked drainage columns and replacing land drains, finding the original patterns and colours for the cast iron work. The zinc of the cupola came from France and an Indian factory supplied the cast iron balustrade. A new base was installed with wooden decking and newly designed ramps to allow wheelchair and equipment access were incorporated into a grass berm. The nearby café was refurbished, including new toilet facilities.

The bandstand reopened in June 2006 with the Merton Brass Band. That season was an experimental mix from opera to jazz, from theatre to folk music. The 2007 season opened on 17 June with a family event. Details of forthcoming events can be found on Lambeth's website (www.lambeth.gov.uk) or on the Friends of Clapham Common website (www.claphamcomrnon.org) (both opened in new window).