New Links in the Chain 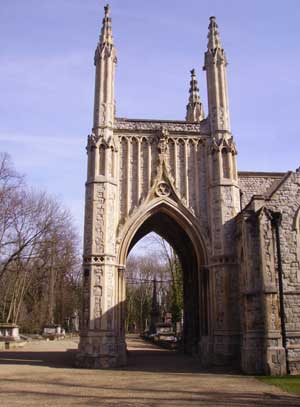 The chapel at Nunhead Cemetery 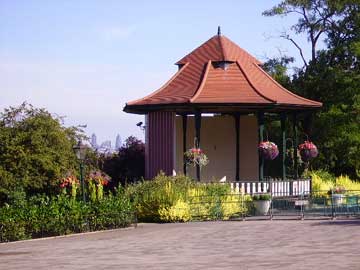 The bandstand in Horniman Park 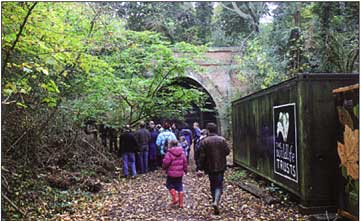 The mouth of the tunnel on the Crystal Palace Branch Railway

The Green Chain in South East London is London's oldest long-distance walk, having stared in 1977. For many years there have only been minor changes, but on the last Sunday in September an additional eight miles were added to the 40 miles already in place.

The new section starts from Nunhead Cemetery. Nunhead Cemetery was opened in 1840, and was laid out by James Bunning. At the start of our walk, the Southwark cabinet member with responsibility for sport and leisure, Cllr Veronica Ward, cut a green ribbon and a party of some 200, led by lan Bull of Walk London, set off.. I had already planned to join the walk; but, as I was given the invitation to the Trust to join in, we were officially present...

Nunhead Cemetery has improved much since I was last there some ten years ago. The remains of the chapel have been cleared and made safe. Leaving by the back - but still large - gates we passed a modern war memorial. We soon came to Camberwell New Cemetery, opened in 1927, the home of the Honor Oak Crematorium, which makes a feature of black marble memorial plaques. The crematorium was opened in 1939, with Maurice Webb and William Bell as joint architects.

Next door is One Tree Hill, with the replacement for the original Honor Oak and the gun battery at the top. The trees have be cleared to give a good view of London with its tall silver buildings. It is a steep climb, and some took the alternative route through Brenchley Gardens. This an area of playing fields that becomes more formal as it reaches Forest Hill Road. It ends with a formal garden that makes use of the slope of the foot of One Tree Hill.

Camberwell Old Cemetery is the next open space. It was opened in 1856 by the local vestry in direct opposition to Nunhead and their idea of cemeteries' being run for profit. It once had some fine buildings by George Gilbert Scott. From this our exit by the back gate was low key, as this a new gate that has been made for the Green Chain.

A walk through some streets of fine houses brought us to Horniman Park. The Green Chain take a direct route through the park, but I would recommend spending a while in the park. It has fine gardens - formal, informal and educational. The Horniman Museum and Conservatory are well worth a visit.

After crossing the South Circular, we entered part of Sydenham Wood and descended Cox's Walk, a wide wooded path. Dulwich Park was our next stop. The Green Chain take a circuitous route through the park. On this occasion the route ended in the Francis Peek Building, where drinks and food were provided - and much enjoyed. The building is used for education and leisure activities.

Dulwich is, however, a spur on the new route. About forty of us set off back up Cox's Walk and into Sydenham Woods. We left the main route to find the remains of a gothic castle that once adorned the back garden of a long-demolished house. There are also the remains of the Crystal Palace (High Level) Branch Railway which opened in 1865 and closed in 1954, having had few passengers since the Palace burnt down in 1937. We went up on the top of the tunnel arch and followed roughly the line of the railway to the station master's house at Upper Sydenham, now converted to flats. A bit more disused track and a modern estate brought us close to Crystal Palace.

If you are not into steep flights of steps (or railways), the alternative route is through Sydenham Wells Park. Originally it was a spa discovered in 1640, and the well head is marked by a large stone. It became a park in the 19th century There are wildlife-friendly ponds and lots of good flower beds and shrub planting. At Crystal Palace the Green Chain route goes through the middle of the park, but we went a bit further north and walked across the terraces of Crystal Palace: the views from this level are better. There are still some sphinxes to guard the approach. We then dropped down to Crystal Palace Station, where our walk ended.