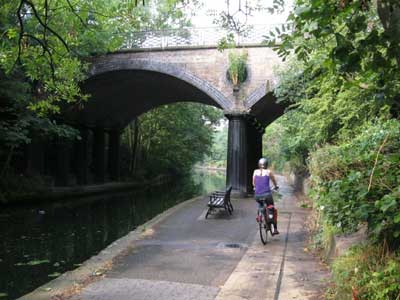 The canal passes through Regent's Park 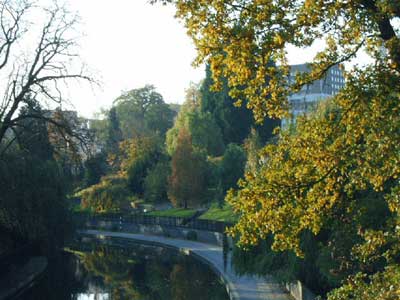 The canal near St John's Wood

Most people who use the canal network are walkers, despite the fact that there are more boats on some parts of the network than there were in the 18th and 19th centuries. The canals form a vast network of open space. Canals came to central London in 1801, when the Grand Junction Paddington Arm was built. In 1811 the Regent's Canal connected the Paddington Arm to the Thames at Limehouse.

The Limehouse Basin is where our walk starts. It is now filled with luxury boats and surrounded by luxury flats; but from here we enter the Regent's Canal as it starts its climb to Camden.

Quite soon we are walking by Mile End Park, a Millennium development including old and new open space. The southern end has a go-cart track, stadium and under 5s area. The park then becomes more landscaped leading to a large water feature that in turn leads to the Green Bridge over the Mile End Road.

Once over the bridge, we are on the site of the New Globe Pleasure Ground of 1840. This was later built over and is now again park. The northern part of Mile End Park has the Arts and Ecology Pavilions. On the other bank is student accommodation with reasonable landscaping. A short walk away are Meath Gardens, which are on the site of the Victoria Park Cemetery.

Back on the canal we pass over the Hertford Union Canal that connects with the River Lee and forms the southern boundary of Victoria Park. There is much to see in Victoria Park but the lake is easily seen from the canal.

A short walk along the canal brings us close to Haggerston Park. Part of the park used to be a gas works and a branch from the canal went into the works. This no longer exists but the line of the branch is marked by lowering some of the flower beds in the formal part of the park.

At Bridpoint Place one can leave the canal to visit Shoreditch Park, which is undergoing a major redevelopment featuring a giant boulder and an amphitheatre to the south; and Rosemary Gardens, also undergoing a redevelopment, but somewhat less dramatic, to the north.

There is another local park off Shepherdess Walk, which has lovely stone sheep and carved wood animals in the under-5s area and one entrance that is by a foot tunnel under 107 Shepherdess Walk. The Shepherdesses were the costumed barmaids at Eagle Pleasure Ground, commemorated in the nursery rhyme "Pop Goes the Weasel".

There is a small park which has a bit of everything from formal planting to mini-football pitch on the side of the City Road Basin. Islington, who manage this part of the canal, included it in the parks portfolio, and the planting as the canal approaches Islington tunnel is particularly good.

Like the horses of earlier times we have to leave the canal and go over the hill. Just above the tunnel entrance is Duncan Terrace, where there are gardens on the site of the New River. These have recently been redesigned in a modern sustainable style. If you are doing this as a day walk, the Angel offers a range of pubs and cafés.

There are several routes back to the canal, but Cloudesley Street will take you past the play park and some fun sculptures by the police station. The route now goes through the Half Moon Estate with limited but well kept planting. At Muriel Street there are a variety of steps and ramps onto the canal. The canal museum is near by in New Wharf Road.

As we go through Kings Cross, there are pictures of the continuing development, including one of Handyside Park. Camley Street Natural Park is on the opposite bank and is worth a visit and over the road from it is Old St Pancras Churchyard now a park, recently restored to its original park design. Elm Village had an overhanging balcony from the private gardens, but the whole development is well planted and managed by the Camden Garden Centre. The churchyard of St Marks is laid out as a garden with seats.

The canal now enters Regent's Park. The first part goes through the zoo and some of the buildings and some mammals and birds are visible from the canal. Once into the public part of the park, we go under Macclesfield Bridge also known as Blow-up Bridge, as a boat laden with gunpowder blew up underneath it. The plane tree just beyond the bridge still shows the scar. On the towpath side are fine private gardens and on the other side are recently built villas that were part of the Regent's Park original plan, but not built. The style is more eclectic that the original styles.

Leaving the park, the canal now heads towards Maida Vale tunnel. The towpath goes through the Lisson Wide Moorings, but, if this is closed, there is an alternative path on the other side reached by a footbridge. The housing estate on the left probably had more planting and fewer cars when it was built. The road route takes us past Crocker's Folly in Aberdeen Terrace, a very large Victorian pub, sadly closed.

After the surreal landscape of the Westway, the canal passes Meanwhile Garden with an excellent skateboard bowl, nature gardens and 'return to work' projects.

Hidden by an old industrial building is the Emslie Horniman Pleasance by Voysey. The formal garden has been restored and there are good play facilities. A footbridge leads to the Harrow Road Estate of the Artizans and General Labourers Dwellings Company. It originally had a small park but this was built over quite soon for economic reasons. As a result of bomb damage, it has lost an area of houses and gained a oark.

A short walk brings us to Ladbroke Grove and buses and the tube. The canal continues to Bull's Bridge where it joins the main canal to Birmingham. It passes Kensal Green Cemetery and St Mary's Roman Catholic Cemetery, which are worth a visit.

Although I have concentrated on parks, there is much to see along the canal: planting from the wild/self-sown to the formal; sculpture and murals; and a mix of new and old buildings.

The whole walk takes about four hours, more if you explore all the parks. As there are access points at most bridges, it is easy to break the walk into bits.