A chance acquisition of a 99-year-old postcard brought out the researcher in Editor HAZELLE JACKSON.

It all started with a postcard. I was idly searching E-Bay for old postcards of London parks, when my eye was caught by an unusual title - '"Neelgherries" the New Pleasure Grounds, Bromley.' 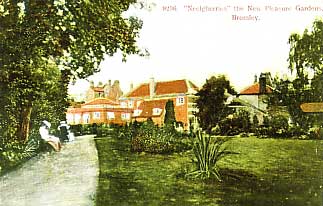 I took another look. The card showed a large redbrick house, a lawn, a gravel path, a lady in a large feathered hat, in fact a typical Edwardian scene. On the reverse it was dated June 13th 1908 and with a message to "Dear Bessie, This is one of the postcards I promised to send you of the new Library gardens in Bromley .... love from Ellen."

I was immediately intrigued - how did such a strange name come to be associated with Bromley and what was its connection with the library there? The answers were surprising and revealed a tale of love across the social divide, linking Bromley, an 18th-century society painter, a 19th-century naturalist, a 20th-century Scottish philanthropist, a distinguished judge, a gamekeeper's daughter and the blue hills of Madras, half a world away in southern India.

The town of Bromley in Kent lies on a ridge ten miles south-east of London on the main London-to-Sevenoaks road. It is first recorded in AD862 as Bromleag, meaning 'clearing where the broom grows'. The River Ravensboume runs at the foot of a steep valley to the west of the town centre, from its source in nearby Keston to Deptford Creek.

Bromley's early importance was due to a weekly market and the Bishop of Rochester's palace, south- east of the town centre, where a chalybeate well in the palace grounds attracted the sick and ailing. In 1774-6 there was a small local building boom: the Bishop's delapidated palace was rebuilt as an elegant summer residence. In the lower High Street new development included, on the western side, a large redbrick gentleman's residence at no. 16, its grounds sweeping down to the Ravensbourne and overlooking the hills beyond.

The parish church of St Peter and St Paul stands at the top of the town, in the upper High Street. In the 18th century the rectory house, Church House, was situated on the slopes of the Ravensbourne Valley, just below the church, in its own grounds adjoining those of No. 16 in the lower High Street.

Bromley local historian Patricia Knowlden believes that Church House was on the site of the original manor house of Bromley, looking towards the Roman camp at Keston, with four medieval stew ponds in the grounds (these today form the lake).

In 1832, Church House was rebuilt by Mr Gould, the agent of the Bishops' trustees. Shortly after completion, the new house and its grounds were leased to Abel Moysey, Esq. a member of the leading Bath family of that name. Dr Abel Moysey (1715-1780) was an eminent society physician in the 18th century, numbering the artist Gainsborough and his family among his patients. There are contemporary portraits of the Moyseys believed to have been painted in lieu of fees. Dr Moysey's son Abel Moysey (1743-1831) was a distinguished lawyer, MP and mayor of Bath.

It was his son, also called Abel Moysey(1778-1839) who took out a lease on the new Church House in Bromley in 1832 and set about improving the grounds. According to local records, Abel Moysey "added very much to the beauty of the place with lawns, steps, shrubberies and fishponds and a new carriageway to the house". Sadly he did not live very long to enjoy his improvements as he died in 1839. A series of tenants followed over the next 50 years.

In the 1850s No 16 High Street, whose gardens bordered those of Church House, was bought by George Sparkes (1810-1878), a former judge in the Indian civil service. Sparkes renamed the house Neelgherries after the hills of Nilgiris (an alternative spelling used today) in Madras in southern India, where he had worked as a judge for the East India Company. Contemporary photographs of Nilgiris in the 19th century show an Indian landscape very similar to the uninterrupted views that Sparkes enjoyed from his house in Bromley.

George Sparkes seems to have settled in well locally. He became a director of the Reversionary Society and he expanded his property - there are references in the local archives to his purchase of land and buildings at No 17 High Street. Sparkes was clearly a keen gardener, as in 1858 he corresponded with his neighbour, John Richardson at Ravensfell, about ancient lights and greenhouses. In 1872 we find him writing to Charles Darwin, who lived nearby at Downe, in 1872 to confer about his primula 'crosses'.

In 1865 George Sparkes had remarried, as his second wife, his housekeeper Emily Carpenter (1819-1900), the daughter of a local gamekeeper. He is said to have educated the lively and intelligent Emily to share his intellectual and philanthropic interests.

George Sparkes died in 1878. As a measure of the high esteem in which he was held by his contemporaries, a granite drinking fountain was erected in his memory on Cheyne Walk, Chelsea, in 1880 with the inscription "a great and good man, gifted with every refined feeling and much esteemed by all who knew him". It is still there today.

On his death, George Sparkes left a large fortune (£140,000) and the house and grounds at Neelgherries to Emily, who travelled and remarried, changing her name to Emily Dowling. The second marriage was unsuccessful and she remained loyal to the memory of her first husband.

When Emily died in 1900, she left Neelgherries and grounds to the town of Bromley for "education and learning", in accordance with George Sparkes's wishes. In 1906 the Scottish philanthropist Andrew Carnegie donated £7,500 for a new library in Bromley and this was erected on the site of Neelgherries. The gardens became the pleasure grounds, these were the first Bromley Library Gardens depicted on my postcard.

Meanwhile, further up the High Street, Church House had changed hands several times until it was acquired in 1889 by Alfred Henwood, a retired South African merchant and his wife, who also improved it. After he died, his widow continued to live there until 1926, when it was purchased by the council. The grounds of Neelgherries and Church House were then merged to form the park today known as the Library Gardens Bromley. A heavy bombing raid in 1941 demolished both Church House and the church itself and only the balustrades of the house remain today.

After the bishops moved out of their palace in 1844, it was sold to a millionaire coal merchant and property developer, Coles Child, and the town marked time until the arrival of the railway in 1858. The Bishop's Palace, initially converted in the 1930s into a new home for Stockwell teacher training college, is now the core of Bromley Civic Centre. New research has revealed traces of the old deer park and Victorian fountains and stonework.

The large open space Martin's Hill, to the north of the Library Gardens, was owned by the Ecclesiastical Commissioners until 1878. Then, amid threats of development, it was bought for the town by the Local Board, forerunner of the town council, and preserved as an open space and recreation ground. From the top of the hill there was a fine view across to the Crystal Palace, enjoyed by the young H G Wells. There are still uninterrupted views west of the town across the Ravensbourne Valley today.

In the 1970s the council decided to rebuild the library and theatre and the new complex was opened by Prince Charles in 1977. The entrance from the High Street is slightly to the right of the former building. The terrace which leads to and overlooks the river is actually on the site of the original Neelgherries house.

The town has undergone substantial development in recent years but the steeply sloping valley to the west of the High Street, down to the river Ravensbourne, is still laid out as a public park called the Library Gardens. The steepness of the slope means there are many winding paths and sets of steps. The layout of the site is perhaps best appreciated in the winter when the views across it are not obscured by trees. There is a lake, winding paths, a rockery and even a bandstand. There have been many changes to the grounds since the original owners set about beautifying them in the 19th century and much more research to be done into their history.

In researching this article, I should like to thank John Ruler and Tony Banfield from Bromley who have provided much advice and encouragement.