A Walk in North-West London

JOHN GOODIER sets off for Brent

I was asked to devise an easy day's walk that included the Welsh Harp, so we start at Wembley Park Station.

As you leave the station, you face the splendid vision of the new Wembley Stadium, all silver and white. I have walked right round the stadium and I can recommend that for a sunny winter afternoon walk, but this walk heads north to Forty Lane past the Town Hall of 1935, which has been described as one the best in suburban London. On to Old Church Lane, with the old church of St Andrew, from the 12th century, and the new church, which was removed from Well Street, Marylebone to here in 1934, having originally been built in 1847. There are pleasant lawns in front of the church, and a somewhat wild graveyard at the back.

We now make it to the Welsh Harp. This is a reservoir built to supply water to the Regent's Canal via a feeder that joins the canal system at Harlesden. Much of the feeder can be followed but is not really a garden walk. The Welsh Harp, named after a pub that is no longer there, is given over to boating, and the surrounding area is mixture of grass and scrub. The area to the north has good paths, the southern area is wetter under foot so I am following the north side of the reservoir to Hendon Broadway.

Now for the most surreal parts of any garden walk, as we cross the North Circular and the start of the M1 by a series of footbridges. Once through this we turn up Oxgate Lane. Near the junction with Coles Green Road is a much altered farmhouse. Rural Middlesex intrudes into the landscape, as it so often does.

Gladstone Park is the first formal landscape in this walk. The park is the grounds of Dollis Hill House, of 1825, currently undergoing restoration. It was often visited by Gladstone and in 1901 it became a public park named in his honour. The walled garden is given over to formal planting and there is a pond with a stature of a bathing lady in it. West of Dollis Hill House is a memorial to prisoners of war and concentration camp victims, with five figures by Fred Kormis of 1968. South of the house and its formal gardens the park is mainly grass and trees rolling down the hill. 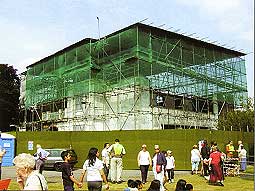 On leaving Gladstone Park we take the underpass to Dollis Hill Station, decorated with abstract murals, and into Dudden Hill Lane, where there are a variety of cafés. After lunch we find our way to Willesden New Cemetery (entrance in Franklyn Road). This was founded in 1891 and originally had chapels in "Pont Street Dutch" by C H Worley. Few of the monuments are of special interest but, as a still active cemetery, it is well maintained. If you look over the eastern wall you can see the Liberal Jewish Cemetery with its more formal layout.

Our next park is Roundwood Park, which is beyond the southern wall of the cemetery. You used to be able to get in to Longstone Avenue from the cemetery, but both the vehicle and the pedestrian gates are closed. I can see why the vehicle gate is closed but I am sure some bike-proof pedestrian entrance could be provided.

Although there are playing fields and a pocket park between Roundwood and our next site, 1 would suggest taking a 206 bus to Queen's Park, although it does take a rather wandery route. Queen's Park is the site of the Kilburn Royal Agricultural Show of 1879.

The site was bought by the Corporation of London and laid out by Major Alexander McKenzie, the superintendent of Epping Forest, in 1887. And herein lies a mystery. Is this the same Alexander Mackenzie of Finsbury and Southwark Parks fame? If so, why is his military rank only given when he is working for the Corporation of London? The park is laid out with two large circular paths in a figure of eight. There is formal planting from the now-closed lych gate with an abstract stature, called Angel Wings, by Kormis. There is good shrub planting around the edges and many good trees.

All three parks have cafés and a variety of sport and play areas. Queen's Park even has a pet zoo and a bandstand. If you don't want to do the full walk, all the open spaces described are worth going to individually.

Site of the 1879 Royal Agricultural Exhibition, the 30-acre Queen's Park has been owned and managed by the City of London since 1886.

It has been awarded a Green Flag for more than ten years running, in recognition of the quality of its services and environment.

It provides a welcome splash of green in one of the most densely populated parts of London, serving the residents of the London Borough of Brent, in which it is located, as well as those of several neighbouring boroughs. Facilities include six all-weather tennis courts, a pitch-and-putt course, a pétanque pitch, an ornamental garden, a children's playground with paddling pool and a café.

Queen's Park was originally called Kilburn Recreation Ground. Queen Victoria gave permission for it to be renamed Queen's Park in celebration of her Golden Jubilee in 1887.