A Green Belt in Itself

BECONTREE, the largest of the LCC's out-of-county housing estates built in the early twenties, has been described as a township in itself. It was built in open country and was surrounded by fields. A good number of open spaces were included, and much of this is now designated Green Belt. One day last summer, I set out to walk the ring of open spaces.

The best place to start the walk is in a landscape that predates the estate. Goodmayes dates from 1901 and was laid out for the Goodmayes estate, a private development. There is the formality that one expects for that age with fine trees and an impressive lake.

Pauline, a reader of this article adds: The Goodmayes Estate is a magnificent formal private development by politician Archibald Cameron Corbett. But the 'lake' in the park adjacent to the development was not part of Corbett's plan. The potential for the lake was created in February 1945 because of the huge crater left by a V2 bomb.

South to Mayesbrook, a large area of playing fields with boating and fishing lakes and the remnants of some wartime constructions near the lake. There are small areas of formal planting near the Sates. This is typical of parks of this period, and also of the location. AlI the houses have gardens so sitting-out areas are mainly for those with young children and the elderly. The main use of the park is as sports fields: it comes as no surprise that two Managers of the England football team were born and brought up in the town.

A quick walk through Ripple Road Cemetery, well-maintained but not architecturally interesting, brought me to Castle Green. Overlooked by three tower blocks recently upgraded and given improved security, and bordering the Al3, it is the least welcoming part of the walk, but the park is well used. It was once prefabs and may become the site of a school.

Leaving here, I found my way to Gorsebook Park, adjacent to a small brook. A good area for biodiversity, and - given the ups and downs of the surface - a great place for mountain bikes. In several sections with various gates, bridges, and odd bits of playground equipment, it is a good hang-out space for teenagers.

Next site is Old Dagenham Park, which intrigues me. It looks, and sounds, as if it were once much better. From there to The Leys, an open space along the Wantz Stream. After a short walk along Rainham Road, an unpromising alley just south of the railway leads to rough land with a large pond.

Once over the railway by footbridge, I was into Thames Chase, an area of old gravel pits in the Beam Valley, and later dumping ground for bombed rubble from London. It is now a Country park, with a state-of-the-art eco-friendly interpretation centre. Grass, trees, scrub, lakes, birds, foxes; a sense of the countryside so close to industrial London.

North from here to Central Park with fine avenues of trees and a formal area near the spectacular Town Hall. 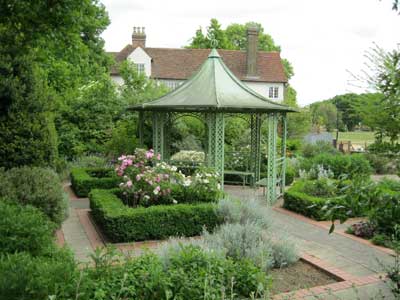 The last park on the circuit is Valence Park. At the heart of this is Valence House a moated farm house from around the sixteenth century which was used as the works office during building of the estate. It became the library once the LCC had left, and is now a museum. There is a period herb garden by Virginia Nightingale in the courtyard, which has developed well since it was planted in 1992. In the park is a millennium maze, enjoyed by young children.

The parks, and the other open spaces in Becontree, are good examples of the design and use of parks in outer London, and some of them are welI worth a visit.