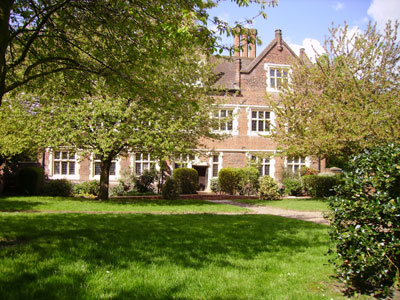 Barking is on the Underground, the Overground, and National Rail so there is no excuse for not going there. It is a long-established town associated with the Abbey until the Reformation and lies beside the River Roding, where many mills once worked.

A visit to parks in the area can be done in two walks from Barking Station. The first takes us east towards Barking Park. On our way we negotiate a major road junction. The roundabout has a sculpture depicting a fishing net, for Barking was a major fishing port until the Thames became too polluted.

Barking Park was opened in 1898 and a major feature of it is a lake, called "the river" by the locals which takes its water from Loxford Water. The park has pleasant paths, some wooded and some open along the southern bank of the lake. There is a fine war memorial and some good formal bedding. The swimming pool is now closed and the associated planting around this is not in a good state. The southern part of the park is given over to a wide range of sporting activities.

Our next park is to the north, but is called South Park, as it is south of Ilford. It too has a lake formed by diverting Loxford Water. The park has many trees and some shrubs. There is a small formal garden at the northern end of the lake. To the west is a football pitch. The original gates remain but the railings have been replaced by mesh. South Park is a 1930s square, as it is surrounded by houses with gables at the front which overlook the park.

The last park on this walk is Loxford Park. This is given over more to sports and there are play areas for younger children. Planting is restricted to the edges. However there is the remains of a sunken area of formal planting. A wide circle of brick wall with four sets of steps down still exists. It now contains some 'trim-trail' equipment.

When I visited the park, there were many families with young children sitting and playing in the space. As with South Park, the gates remain but the railings are gone except by the park keeper's house. You can judge how much better both parks would look if the green railings were still there.

From the road south of the park a number of roads lead towards Barking Park, but none of them makes it, as they stop at the ditch that forms the original course of  the Loxford Water, bypassing Barking Park lake. This ditch marks the boundary between Ilford and Barking and almost certainly was the site of a ford.

Our second route take us west through the street market to the site of St Mary's Abbey, of which only the Curfew Tower remains standing, although some other remains are visible. St Margaret's church occupies part of the site. There are playing fields to the north and south, opened in 1974.

Then we go south and east to Greatfields Park. This park opened in 1926 to serve a council housing estate. The park is in good condition. The central hexagonal beds remain. The planting of the formal beds has in some places been designed for low maintenance and consists of ornamental grasses and lavender, but in other places there is a great variety of species. The edge of the park is planted with trees and shrubs and there are many single trees and some avenues. The southern part is given over to games.

Our route now takes us through the housing estates passing St Patrick's Church of the 1940s, where more could be made of their small churchyard. And then it suddenly appears - a tall red-brick Tudor building rising above the roofs of the interwar council houses.

Eastbury Manor is a remarkable survival, having been used as a barn once it had ceased to be habitable. The grade-I-listed building is now owned by the National Trust and is open to the public on a regular basis. The gardens make some reference to Tudor gardens and there is a new courtyard garden.

It is quicker to return from Upney Station, or you can walk back to Barking.