John Goodier set out to see a particular park, but discovered a walk connecting many of Poplar's green spaces.

We start at Westferry DLR station, and the first open space is between Pennyfields and West India Dock Road — it is an area of grass surrounded by shrubs and some post-war flats. A more substantial park is Pennyfields Park, which has a wide range of play and climbing equipment. Interestingly, this park is funded by the council's Children, Schools and Families department; some of the other parks on this walk are similarly funded.

Next comes Trinity Gardens on the East India Dock Road. This is part of the Lansbury Estate, built for the Festival of Britain. It has one chest tomb, an anchor sculpture and three Festival of Britain planters, as well as seats, play equipment and a few trees. The park is named after Trinity Church, which was built in 1951 and is now the Calvary Charismatic Baptist Church. The other church in this area is St Mary and St Joseph, designed by Adrian Gilbert Scott and completed in 1954.

To the north in Canton Street is Church Green, the site of a church bombed in the Blitz, and now surrounded by shrubs. The arms of the former Catholic school and a statue of Our Lady Star of the Sea connect with the area's past, and the centrepiece is a sculpture entitled A Doorway of Hope, by Nicolas Moreton. This area had a makeover by Murdoch Wickham in 2015 with the construction of the New Festival Quarter housing development, on the old school site.

Bartlett Park to the north is also undergoing a complete makeover. This includes a new fully accessible play area, improvements to the layout of paths and entrances, and a new changing facility, while the redevelopment of Cotall Street will allow the park to open up to the Limehouse Cut canal. Bartlett Park was created on the site of bombed houses, and two roads remain in the park; these are occupied by private housing that was built, mainly by council tenants, as part of the Arcadian Self-Build Housing Scheme during the 1980s.

In this area we can also see the remains of St Saviour's Church, which caught fire in 2007. The remaining walls are held up by scaffolding, and the intention is to convert this site to housing. This area is one to visit again once the redevelopment work is complete.

To the east of Bartlett Park is the Lansbury Estate, which has a generous provision of open space between the blocks. With the addition of other smaller open spaces in the many housing areas as well as the front gardens of some of the houses, the whole area seems green.

The Limehouse Cut was made a conservation area in 2011 and its towpath provides a quiet walk from Limehouse to the River Lea. Most of the canal is outside this walk, but one could start at Ropemakers Fields, named after the traditional local inustry; the rope connections are alluded to by details on the railings. Ropemakers Fields are also undergoing improvements to its play equipment. The Cut joins the River Lea Navigation at Bromley-by-Bow, but this is a walk for another day.

Furze Green is an open space between the houses off Devons Road. Redevelopment of the area and improvements to the park were proposed in 2005, and the park reopened in 2009.

Returning to East India Dock Road, we visit Poplar Recreation Ground. This was originally crown land and later became the property of the East India Company; it became a park in 1866. Within it stands St Matthias Old Church; the church dates from 1652, was rebuilt by W M Teulon in 1876 and became a parish church in 1988. The park has facilities for tennis and football, and in the centre is an enclosed garden with seats surrounded by shrubs. A war memorial commemorates the 18 children from the LCC School in Upper North Street who were killed by a bomb in the Great War; the sculpture of an angel is by A R Adams.

A little further east is All Saints Church, Poplar; the site dates from 1396 but the current building by Charles Hollis was finished in the 1820s. The churchyard has been partially cleared, but an area with some retained graves is now a garden of remembrance.

The Brownfield Estate, off Crisp Road, has good planting, including a formal seating area. Passing through the estate brings us to Jolly's Green, which has a great range of exercise equipment for all ages as well as one small flowerbed by the north exit. The park was very full on the bright Saturday when I visited.

We pass the war memorial at St Michael's Church to our last space, and the one I set out to see. Langdon Park was opened in stages in the late 1950s. It is probably named after Father CG Langdon; Langdon was Vicar in the 1920s and was involved in the Poplar Rate Rebellion — a tax protest led by George Lansbury. The park has a skateboard park and some play equipment for children, and an ongoing initiative aims to plant 39 trees through public involvement days. A statue of Teddy Baldock, 'The Pride of Poplar', who became world bantamweight boxing champion in 1927 at the age of 19, was unveiled in 2014. Its place in the park is overlooked by the boxing gym in the youth centre.

One further project based at the Park merits a mention. Steel Warriors is a charity which makes street workout equipment out of melted down confiscated weapons; it also provides fitness training using the equipment to give young people the physical confidence not to carry knives.

We have visited a several parks, most of them with an emphasis on children, exercise and open space for flat-dwellers, but as usual we have found many historical links and stories. As I leave from Langdon Park Station, opened in 2007, I will look out for Kate Davis's sculpture Whoosh — a fitting send off to our walk. 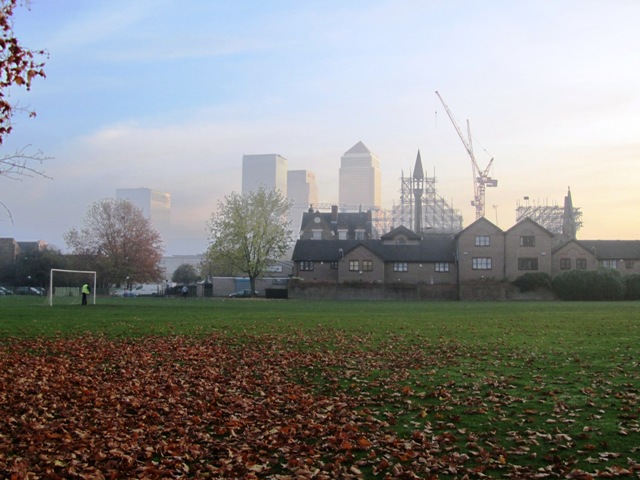