A walk in North London 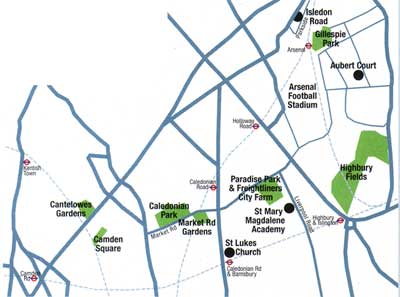 I started this walk at Kentish Town, heading towards St Luke's church in Olney Crescent. The imposing red-brick church is surrounded by grass and impressive trees. There is some flower planting by the church: but I think taller and more massive planting would better match the building.

The first park on the walk is Cantelowes Gardens and Skate Park. This is given over to sport from five-a-side football to adult gym equipment. There are play areas for children and a wonderful natural play area laid out like a dried-up river with boulders. There are seats, some planting and trees for the less active visitor.

Camden Square, which dates from around 1830-40, was originally a locked square. It is now open to the public, but traces of the original layout remain. There are a variety of mature trees and some more modern rose beds. One end of the park was an adventure playground, but this has been replaced by a play centre. With the strict separation of the dog area, it is now a square in three parts. As you come to Agar Street, there are a number of drain pipe planters; blocking a possible rat run and adding some greenery to the street scene. Over the road is Maiden Lane Estate by Gordon Benson and Alan Forsyth. It is one of Camden's innovative 'tower block on its side' housing projects. There is a good area of buffer land by the railway with grass, play equipment and rough meadow; along with some art work on the railway wall. There is plenty of garden space amongst the housing as each unit has a small open space.

Caledonian Market (1852), was a replacement for the Smithfield cattle market, and later became a second-hand market. The architect was J B Brunning. The clock tower and some of the original railings remain. It was laid out as a public park in 1958 with formal planting; but over time it has become a semi-natural woodland and meadow. Recently a community orchard has been developed, growing historic varieties. Slate plaques with quotes from Charles Darwin's journals have been placed along the paths. It has also glained some modern play equipment. Over Market Road, behind more of the original railings, are various sports facilities. At the end of these is Market Road Garden, a small formal garden with a pergola that the roses have yet to cover. The central bed has bold architectural planting.

Paradise Park is mainly given over to play with equipment and a playing field. Next door is Freightliners City Farm. This has good mosaic work on the exterior walls and at the entrance. It has some bold and colourful planting near the entrance as well as the usual farm animals and a number of beehives.

Before entering the next park, take a look at St Mary Magdalene Academy in Liverpool Road. This is a new building of 2009 by Fielden Clegg Brackley Studios that reflects the mass and urban importance of the old board schools. It even has a playground on the roof. Nearby St Mary Magdalene (1814), in yellow brick with stone decorations, is by W Wickings. The churchyard is now a park. A few chest tombs remain but most of the grounds are grassed over. There are some large rose beds and a small wild flower area. Near the main road is a small knot garden; it needs replanting.

Highbury Fields were purchased in 1855 by the Metropolitan Board of Works to provide a park. Originally planned as Albert Park, to match Victoria Park, it ended up a much smaller park, divided into three parts by roads. The war memorial, in an art déco style, commemorates those who died in the Boer War: it is surrounded by appropriately tropical planting. The rest of the park is mainly set to trees and grass, with a small woodland area. At the north of the park is a café and play equipment. Christ Church, built in 1847 but since altered, has a small grassed area with some trees. Nearby is an iron clock tower commemorating Queen Victoria's Diamond Jubilee.

Aubert Court is a splendid development of post-war social housing by E C P Monson. There is good planting in raised beds along the front. Behind, there are substantial gardens, a legacy of the Dissenters' College that stood on the site. Unfortunately there is no public access to the gardens, but they can be seen from the road.

The old Arsenal Stadium, laid out by A Leitch in 1913 with stands from the 1930s and 1992, has been converted to luxury housing. Much of the exterior wall is retained and it is worth walking round it. Much of the pitch has been turned in to a very formal private garden. There is a permissive path along one side, so one can get a reasonable view.

Gillespie Park, on the site of the Great Northern Railway sidings which fell out of use around 1960, was made into a park in 1983. It is run as a nature reserve with full public access. The ecology centre is to the west of Arsenal Station. Parts of the park are subject to wildlife management. Over the years it has been extended, so it is possible to follow the railway up to Finsbury Park. Towards the end, You are aware that the park and the railway are several feet above the surrounding land. You descend a steep flight of steps to come out on Seven Sisters Road.

I had intended to end the walk here. However, the map in Arsenal Station showed Isledon Gardens, so I went under the railway bridge and down Isledon Road. There is a 1990s housing development here on railway land and the sloping ground is laid out as compact little park with a sports area, a couple of slides for smaller children and a formal walled area with benches, flower beds and a complex of steps and balconies. Further down Parkside Road is a community garden with vegetable plots, a mini-nature reserve and a sitting area. The nursery school, between the park and the garden, has a green roof. This walk covered a wide range of park uses and styles that are typical of an inner suburban location.