A quick look at a map of the Morden area will show how much of the area is green open space. Not all of this is public - there are many school and private playing fields, and Morden Park, the largest single open space, is half for public and half for school use. The park was purchased by the Council in 1945 and its southern public area includes the leisure centre and swimming pool, while a house dating to 1770 acts as the Register Office and events space. Most of the park is grassland with large groups of trees, and in 2000 much of it was designated a local nature reserve.

Along Cannon Hill are two recreation grounds. The Joseph Hood Recreation Ground is mainly playing fields with some play equipment, and was named after a local MP and businessman who was also a generous benefactor to the area. Next to it is Cannon Hill Common, which is not common land; it became a park in 1927 and the site of the house was made a bird sanctuary. It is now managed as a nature reserve with some of the grassland managed as meadow. There is a long ornamental pond between the two parks that ends at Cannon Hill Lane at a false bridge.

Morden Cemetery is a short bus ride from Morden, and opened in 1891 as a new cemetery for Battersea. The entrance is a gothic gateway, opening onto an avenue of Lombardy Poplars which lead to the Chapel; in 1958 this was remodelled as a crematorium, and it retains its pre-GLC name of North East Surrey Crematorium, despite being owned by three London Boroughs. The lawns along the avenue are closely mown, but much of the rest of the grassland is managed for wildlife and is mown at intervals to maintain its rich biodiversity. To the north are the variety of gardens and spaces associated with crematoria, while other areas contain graves. There are some local civilian memorials and a military war memorial.

Next door is the Merton and Sutton Joint Cemetery, opened in 1947, which offers a nice comparison of management styles with its neighbour. Its formal gates with urns open onto the main drive, which is edged by flower beds. This leads to the chapel, designed by Albert Thomas in a domestic style but with a massive porte cochère at one end. The cemetery is laid out on a formal grid with some ornamental trees and the grass is tightly mown, even in the area behind the chapel that has not yet been used.

If you follow the Green Lane between the cemeteries, you will pass the Morden Equestrian Centre, where you can spot a field full of horses in Zone 4! It also leads you to The Hamptons housing estate, completed in 2011-12 by St James and built in a New England style, which offers a good example of a development that has made a major addition to open space. On the site is the new Mayflower Park, continuing the New England theme, which is open to the public; it rises to a central hill which is designed to act as an amphitheatre for community events. The hill gives a view of the extensive wetlands, which opened in 2007, and the walkways which thread through them. There are also small water features in the various sections of the development.

Also in the area is the Sir Joseph Hood Memorial Playing Fields and Wood. The wood was planted in 1860; until 1990 it was a bird sanctuary, but it has now been opened to the public. In 1999 more of the park was planted with native trees, which are now mature enough to be subject to a management scheme which includes coppicing to diversify the structure, and removal of invasive species like sycamore. The Beverley Brook runs through the wood and can, in sections, be followed to Putney. Part of the playing fields is now managed as meadow, but there is still plenty to do; a trim trail funded by the Norland Foundation aims to improve social inclusion and there is plenty of equipment for teenagers and younger children, including tennis courts, basketball nets, crazy golf and a paddling pool. The 1950s pavilion is used by Rascals Soft Play for children aged 0 to 5, and there was lots of equipment out on the grass on the sunny day when I visited the park. The park has achieved the Green Flag Award for several years, and its active Friends group was organising Sir Joe's Party in the Park for the Saturday after my visit. The park feels and looks like a typical suburban park, connected to other open spaces by metalled paths through scrubby woodland, but in fact it is just a short walk from Motspur Park Station.

Our last site is Morden Hall Park. This was left to the National Trust in 1942, although the Trust did not take on the management until 1980. I first visited in the early nineties, and the park has changed much since then. The River Wandle which flows through it has been channelled into a number of routes, some ornamental, but some industrial - for example to the tobacco snuff mill, now used as an interpretation centre. Morden Hall, dating from 1750, remains, but with no public access, while the stable yard now houses a café, exhibition space and a well-stocked second-hand bookshop. There are many paths both surfaced and informal amongst the trees, through various types of woodland, and an area towards the tramway is managed as wetland. A formal rose garden is used for yoga classes, and the site also boasts an adventure playground, garden centre and gift shop.

Most of the parks and open spaces in the area are intended for sports and gentle walking. Houses in Morden nearly all have gardens, so flowers and young children's play are available at home. Morden Hall Park provides all the other facilities that a park can provide such as cafés, play equipment and school holiday activities, while Deen City Farm is a short walk along the Wandle, downstream from the park. The Wandle itself offers a long-distance walk running from Wandsworth to Croydon, and is well worth doing.

I cannot conclude without mentioning the John Innes Park, which I included in my Alpine Railway walk in a previous issue. Since then the anniversary of John Innes' death in 1904 has seen the park receive new planting, sculptures and its own rose variety; it is well worth another visit. 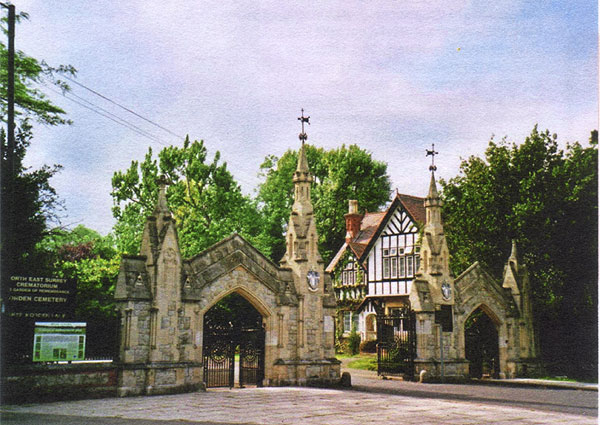