A Walk through Greenwich's ‘Other’ Parks 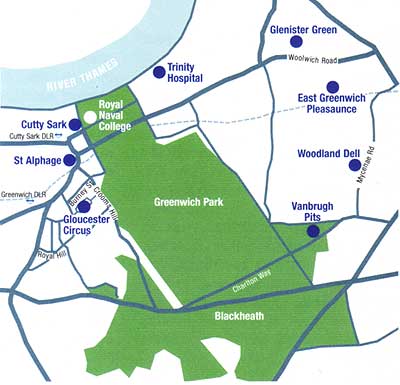 With Greenwich Park being used for the Olympics, I thought I would explore some of the other parks in Greenwich.

Setting off from the Docklands Light Railway, I headed for St Alphage Church. There has been a church on the site since soon after the martyrdom of St Alphage in 1012. The church was rebuilt by Nicholas Hawksmoor from 1712 to 1714. The tower was later rebuilt by John James in 1730. The church was restored by Richardson after the war and the tower has recently been further restored. It is worth taking a good look at the tower from the street, where it is not obscured by trees. The churchyard is paved at the front and partly grassed over at the back. The gravestones have been moved to form low walls.

The additional churchyard of 1803 was closed in 1853 and in 1889 became a public park known as St Alphage Park. It has mature trees and beds of mixed shrub and herbaceous planting. There is also a grass play area.

Burney Street has two pocket parks. The first we come to is at the corner with Crooms Hill. This park started with a tree planted in what was a bomb site, in memory of the first chairman of the Greenwich Society, Cecil Day Lewis, the poet. He is also commemorated by a Blue Plaque on the house by the garden. The park now has a bench and more trees and shrubs. The second, at the corner with Royal Hill is a bit larger and has a pink granite obelisk giving 1981-2 as the date it was created. The park remembers Doug Mullins, a master baker who was born and worked in the shop on the site.

Gloucester Circus, one of many schemes by Michael Searles, is a private garden but is easily seen over the fence. it has trees and shrubs and a central lawn. There are no metalled paths in the garden, an arrangement that would not be maintainable in a public park, but does look nice.

A steep climb takes us to The Point. This is a grass area surrounded by trees with good views over London. Walking away from the view, we come down onto the outlying parts of Blackheath. The area of Blackheath south of the Royal Park is a large flat area of grass used by kite flyers, intersected by roads. The outlying areas are more wild and rugged. Our route goes along CharIton Way by the wall of the park. This brings us to Vanbrugh Pits, which are old gravel pits, one of the wilder parts of Blackheath. Gorse is the most notable shrub in this area with its bright yellow flowers. It is worth stopping to look at the hall of Blackheath High School. It was built as a chapel when the buildings were a Church Army training centre. It is by Earnest Spashett and was built in 1965. It is now a dance and performance space.

About halfway down Mycenae Road is Mycenae House, once the home of Angestine, an aggregates merchant. The house is now a Steiner school and the newer building is in community use. If you go between the buildings, there is a lawn that falls away steeply into woodland. The views to the Thames are now hidden. Further down the road there are entrances into Woodland Dell, which is mature woodland subject to very limited management. It is beloved by dog walkers and is a haven for wildlife. There are two entrances, so you can walk through the wood.

East Greenwich Pleasaunce is the next garden, over the railway line. You can cross at the station or by one of the roads that cross the line. We enter the Pleasaunce by the recently made back gate. This park was the burial ground for Greenwich Hospital. It was opened in 1857. There are a good number of gravestones remaining in place. There is also a memorial to the approximately 3000 bodies transferred to the pleasaunce from the Royal Hospital Infirmary Burying Ground in 1875, when the railway was built. The graveyard became a public park in 1926. In the thirties the council planted limes, which are pleached above the high wall which surrounds the garden. There is a play area and a One O'clock Club. The café has a new eco-friendly building with solar panels. It is built of breeze blocks with a rigid steel mesh attached. Clematis has been planted to grow over the mesh. Currently the clematis prefers the roof to the walls but is should bulk up in time. We leave the park by the original entrance onto Woolwich Road where the original gate house remains. It has a suitably military look.

Our next park was a surprise to me. Glenister Green is an area of grass with some trees acting as open space to the flats behind. What makes it worth a visit is the mural of people who wed the river at Greenwich on 60 concrete panels by Philippa Threlfall. It was made in 1972 for East Greenwich District Hospital, which stood over the road and was eventually demolished and the mural was moved here in 2006. The images run from the Royal Barge to the last days of the docks at Greenwich in the sixties.

We take Pelton Street down to the Thames. As we turn towards Greenwich, at Anchor Iron Wharf, there is a sculpture ‘Anchor Iron’ by Wendy Taylor dating from 2007. It commemorates the industries that have been located at that site. Next to it is a semi-public hard landscape. There is a small private garden with a sculpture of a goat as memorial to all the uninfected animals slaughtered in the foot-and-mouth epidemic. It is becoming overgrown. The flower beds outside Trinity Hospital have been replanted with perennial, somewhat architectural plants. The gardens of the Hospital are occasionally open to the public. It is a quiet space below the looming Greenwich Power Station. After slipping inland, the Thames Path regains the river by the Nelson pub with its recent stature of the admiral. It then passes along the front of the Royal Naval College to Cutty Sark Gardens where the ship, in all its restored greatness, rides high.