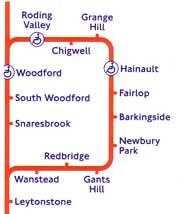 I have been exploring the far eastern Central Line for some years and I want to share some of the open spaces in the area. Some are linked as a walk and a couple may be best visited as individual sites.

Barkingside Station was designed by William Burgess and built in 1903. The station for Barnardo's Village is an ornate building suitable to receive important Victorian visitors to the Village. So our first site is the former Barnardo's Girls' Village Home opened in 1876. Built to provide a family life, it consisted of 64 cottages and several larger houses arranged around three greens with a church (Grade II listed) and several communal buildings, designed by Ebenezer Gregg. Little of the original complex remains today and the houses have been converted to other uses, including sheltered housing. The cottages are in a quaint and chunky design and probably would appeal to young children. One of the houses has an eye-catching octagonal clock tower (1887) and is a memorial to Lord Cairns, one-time Lord Chancellor and the first president of the charity. There is a large monument to Dr Barnardo over the site of his grave, which is by George Frampton. There is some new building going on to provide houses, but the green remains as open space where the public are welcome.

Barkingside Park was opened around 1906, and has a large drinking fountain of that date. It is mainly grass for sports with perimeter trees. Like many parks in the outer suburbs, it is basically a space for play, as most homes have their own garden for flowers.

Barkingside Cemetery was opened in 1923 and includes a section for children and staff from the Barnardo's homes. There is also a civilian war memorial. The lettering on this has become worn and the names have been re-carved on a slate that has been fixed to the original structure. This is a more practical solution to this sort of problem than re-carving on the original soft stone. The memorial was dedicated on Armistice Day 2014. In 1954 a new section to the west was opened which includes a garden of remembrance. Sheltered by trees, it has a variety of planted beds. Holy Trinity Church is next to the older part of the Cemetery and has its own small graveyard, which pre-dates the current church and has graves from the 18th century. These include chest tombs and other imposing structures that contrast with the simple headstone and curb of the modern graveyard. The current church designed by to see the west lancet windows by John Lawson that were made in 1992.

Our next park is Clayhall, but on our way we pass the Doctor Johnson pub. Designed by H Reginald Boss it includes a large relief panel of the Doctor by Arthur Betts. A listed building, it is now closed and under consideration for conversion to retail and maybe residential use. Big thirties pubs like this are an important part of the streetscape and are vanishing fast.

Clayhall was a manor house that was broken up in 1927 and part was made into a public park in 1934. Clayhall, like Barkingside, is mainly given over to play and sports. There is equipment for all ages and some hard courts for ball games. There are a good number of mature trees as well as formal beds and pergolas laid out in the shape of a cross.

Redbridge Recreation Ground has been open for some time, but for the 2012 Olympics it was designated a Queen Elizabeth II Field. It is mainly grass with two play areas and the north end is designated for nature conservation. There is an arboretum with a mixture of native and introduced trees.

The next stop is the PDSA Animal Cemetery on Woodford Bridge Road. Opened in the 1920s, it is the resting space of many pets, including twelve recipients of the Dickin Medal (the animals' Victoria Cross). In 2007 the cemetery was restored and improved with the People's Millions Lottery Fund. There is a small visitors' centre where you can find information on the Dickin Medal and the pets that received it, and there is a remembrance garden designed by Bob Flowerdew. The planting scheme is green, brown and light blue reflecting the sea, land and air of the armed forces served by courageous animals. The planting includes rosemary, for remembrance, and there is a paw-shaped area with pillars on which one can hang pet tags. The area is called 'Paws Forever' and is dedicated to the assistance dog, Endal, who was awarded the PDSA Gold Medal (the animals' George Cross). Endal was present at the opening of the garden; he died in 2009.

One can now get the bus to Redbridge station or walk along the river Roding. Access is via an entrance on the bend in Roding Road. The path is short grass and can be muddy. It runs along the river and is bordered by trees, shrubs and perennial plants. The path is part of the Roding Valley Way, which starts near Roding Valley station and continues south through Wanstead Park to Ilford. For this walk we end at Redbridge station.

Fairlop Waters Country Park has an interesting history: it was used as a military flying station in the Great War and there was a flying club there between the wars. In 1939 the Corporation of London bought part of the site to build a London airport, but central government opposed this idea. During the Second World War it was taken over by the RAF. The airfield closed in 1946 and d the land was used for gravel extraction and some of the pits were used for landfill.

In the 1980s it was converted into a country park. There are three lakes, one of which is used for boating and another for fishing. A golf course and driving range occupy some of the park. There is a network of paths to explore and there are play and exercise areas for all ages. A suite of function rooms and a bar and restaurant provide for less active pursuits. Access from Barkingside station is from Station Road, which is not the road the station is in, but the road that runs behind the station. There are two entrances: one leads into the golf course and you need to keep close to the boundary fence and hedge, or you can carry on to the end of Station Road and enter through a group of oak posts, which have carvings on them. This structure is 'Meet by the Old Oak Tree' carved by Jason Parker in 2014. It recalls the old Fairlop oak. From here you can walk on bonded sand paths. Part of the land is managed as a nature reserve; there is a lake for water birds and fish and some of the land is wet and forms temporary ponds in spring for amphibians, and there are areas of scrub and trees. At the north- east corner is the largest artificial boulder park in the UK. There are nine boulders made of sprayed and carved concrete. They offer a range of climbs from easy to Font 6a, that is to say challenging. Look out for the Ammonite `fossil'! There is an adult trim trail and some adventure playground structures for children. Both of these are made mainly of wood and so blend into the scenery. At the main entrance in Forest Road is a large sculpture in steel. One could leave here or follow the path to its end to reach Fairlop Station. Alternatively you can walk round the edge of the golf course back to Barkingside. One could easily spend a day in the park.

One more place you can visit in the area is the Forest Park Cemetery and Crematorium. This was opened in 2005 and was the first crematorium opened in London for 40 years. It is located towards the eastern end of Forest Road. This is rather a bleak road, but if you walk it you can take in Fairlop and Hainault recreation grounds. both areas of playing fields. And both have well maintained hawthorn hedges. To the south of the road is agricultural land. It is strange to be on a fast straight road in the middle of the country.

The cemetery is in an area of undulating land with the crematorium located in a hollow. The design is simple and the materials are natural wood and stone. The building has a large gable roof that extends forward to provide a canopy for the hearse. The chapel is a large, naturally-lit space. The general design follows that of many post-war crematoria by not looking church-like, but a combination of domestic and modern industrial. This reflects the ambiguous status of crematoria, for some they are religious places, for others not. I went into the chapel before a service and it felt a very peaceful, calm space. Large windows let in lots of light and the furnishings are simple. Memorial trees, such as flowering cherries and pear, create a natural border around the crematorium and shrubs screen the car park. Rising to the east of the crematorium is the burial ground. Most of the grave markers are headstones in black or grey. Among the graves are small rose beds and columbarium structures for the placing of ashes. This mixture of burial and cremation memorials is unusual but works well.

This extended walk has literally gone from cradle to grave. It has covered memorials and remembrance. In so doing, it reveals the wide range of things people can do and enjoy in London's open spaces.